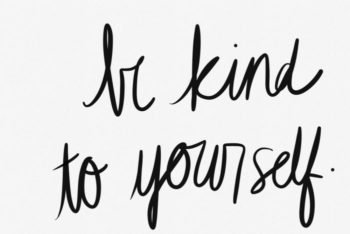 “Be kind to yourself.” Back when I lived in Scotland, my friend Tony used to say that to me all the time. I think it was something he said to everybody. The first time for me was during a conversation we had in a café a few blocks from the museum where we both worked. At the time, I was processing a lot of personal stuff; I had recently broken up with a girlfriend (or let’s be honest: she had broken up with me). I was feeling down, like the world had collapsed in on me. And I was manically working to try to compensate. Tony knew that approach wasn’t sustainable, so he stopped me in my tracks. “Kiran, you need to be kind to yourself,” he said. And he repeated this message every time I saw him. (I guess I needed to hear it.) His advice was to slow down, focus on personal care, and go easy with work. His words made an impression, and I still think of them often—probably because he said them to me so many times!

On September 11, 2001, I was living and working in Edinburgh in a shared flat off the Royal Mile. There was a collection of us, from all walks of life: yoga teachers, vegan activists, educators, and travelers. I remember watching the Twin Towers collapse on TV with one of the American backpackers who was staying with us. Right away I felt a huge amount of anxiety and worry about what would happen next. I could see that the world had just taken a big step backwards in terms of multiculturalism. I began working very hard, feeling almost panicked that there was so much to be done.

I was correct, unfortunately: we now know that racism was on the rise. Communities of faith became a source of unfair suspicion. People who looked a little different or wore articles of faith like hijabs and turbans became targets. I saw a society divided at a time when it felt so important to stand together. And I knew we were better than that. Even in my own lifetime I had seen positive change. I started to think about how I could respond. Immediately, I joined the anti-war movement. My activism became more involved. There were so many things I got involved in, so many causes that felt related to one another. I took out the phone directory, and called places of worship. I met with rabbis, imams and priests. In just six months’ time, my colleague and I created an event at the National Museum of Scotland that brought together people of faith, diverse traditions, artists, young kids, school kids, teachers, parents, and families. A few thousand people attended. We had choirs and musicians and poets and artists and children. People of faith told their stories. I didn’t realize it at the time, but it was really a storytelling event.

These were all great things to do. It was important work. But the hardest part was remembering my friend Tony’s words: “Be kind to yourself.” Sometimes in a process like this, we rush to react.

These last few weeks have felt like a test for the role I can play in helping others. I’ve had so many conversations with family, colleagues, friends, and even strangers about next steps and how we can work together. It’s helpful to talk about how confused we feel. There’s a lot of information to sift through because we’re all in survival mode, not just for ourselves but also because we feel a sense of responsibility for our families, for each other, and for the organizations we serve and protect. It’s a lot to take in at once.

One night, when I was feeling particularly anxious, I realized that I’ve felt similarly in many situations over the course of my life. It’s natural to fear the unknown, whether it’s the end of a relationship, the beginning of a war, or the terror of losing a loved one. Any disruption in our lives is a source of anxiety and struggle. It’s the way of things for worry to come to the surface. Feeling out of control isn’t pleasant, but it’s a coping mechanism. My thoughts keep returning to my friend Tony’s advice to be kind to yourself. It’s almost like a personal mantra. I’ve taken to saying it to other people, including my staff and my neighbors. I begin my online workshops by asking people how they’re looking after themselves. This is part of the work that we all have to do!

As you move through the coming weeks, keep in mind how important it is to give yourself ample time to process everything that’s going on. If you have the opportunity to take five or ten minutes out of the day, try taking some breaths to relax, going for a walk, sitting on your front porch (if you have one), or even making a nice cup of tea. Reflect on a memory or a moment that makes you feel happy. Perhaps tell yourself a story about a time that you did something really well. It doesn’t have to be complicated.

It’s important that we make this self-kindness a priority, because often it’s the first thing to go in a crisis. If it helps, set an intention: I’m being kind to myself, and when I am kind to myself, I feel more in control. I can understand and make sense of this world more clearly. I can see and imagine something beyond the unknown. I can take small steps, every day, to help me through. I can help myself be mentally healthy and well. We can serve one another best from a position of strength. Self-distancing is itself an incredible act of compassion. We’re acting in kindness, to ourselves and to others, and that’s the first step in getting our work done.

ISC is building a better world through the power of storytelling.