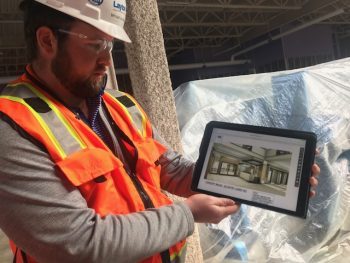 When I was a kid growing up in England, my dad, who is an architect, would often take me on site visits. Here in Jonesborough I recently made a visit to the site of a regional hospital that’s being built. One morning not too long ago, as we were talking on the phone on my way to work, I told my dad about it. I asked him if he remembered taking me on all those excursions when I was young. There’s one that stands out in my memory, a Mazda building he was working on. The car manufacturer was building a headquarters in a town called Tunbridge Wells, between London and the town where we lived, on the south coast of England.

My dad’s philosophy is that there is something you can learn in everything—even washing the dishes. Now, as an adult, I sometimes wonder if he just said that as a way to get me to wash the dishes. But accompanying him on these site visits, anyway, was a true learning experience. My job was to hold the measuring tape as my dad took notes. In the car, on the way to the site, he’d usually fill me in on whatever it was he was working on. For the Mazda project, he’d been tasked with redesigning a portion of a building that would serve as an extension to the company’s headquarters. It was a very large site, and the owners had decided they wanted to keep an old tree and build around it. An entire area had to be redesigned to make this tree part of a courtyard that staff and visitors could enjoy. I remembering thinking how cool it was that my dad was saving this tree. Now as an adult, I can better appreciate how committed these people were to combining the old with the new—a charge that’s not always taken seriously enough in today’s fast-paced world.

My dad never rushed a job. He wasn’t formally trained, but he had a reputation as a draftsman who never made a mistake. As a result he was often given the jobs that needed a careful, sophisticated, and experienced eye for detail. Frequently younger architects came to him for advice—so much so that his boss eventually made him a formal mentor to the firm’s young architects. (This was perhaps another example of combining old and new.) Something I remember noticing as a kid was, where most people use their fingers to count, my dad used the segments of his fingers. It’s a practice he still follows to this day. Recently he told me it was a sort of abacus-like system that was used in the time before calculators. He said he just did when he was a kid and kept up the practice. I don’t think even he remembers when he learned it, but it still works today.

Over the years, I have instinctively found myself applying many my dad’s careful manner, skills, and observations in my own work, even though the substance of it is so different from his. Through a wide variety of projects that I’ve pursued in different jobs—curating museum exhibits, developing and managing arts programs, and working on big events like our National Storytelling Festival—I’ve thought of storytelling as a philosophy to design, almost as though I’m building a house for people to live in. I thought about this during my research project as a Rotary Fellow in Chapel Hill, North Carolina, when I was working with a homeless shelter, and then again in Tennessee, when ISC established its long-term partnership with Dollywood’s DreamMore. We worked with the team at DreamMore to use storytelling to enhance guests’ experience, and it ended up earning our inaugural Storytelling Seal of Excellence, a new program that we launched in early 2016. As we’ve developed that program, we’ve made sure to grow in the right way, with an eye for quality.

At different times during all these different projects I worked on at various stages of life, some of which were quite complex, I found my thoughts returning to the time I spent doing all those site visits with my dad—how I had no choice but to watch and learn. The process taught me about the value of slowing down, being patient, and really thinking through how to resolve problems. It taught me how exploring a job from every angle helps to do it right.

Over these past few years, my team at ISC and I have been thinking about how to help other organizations establish storytelling-based programs across the region (and beyond) to foster healing, happiness, and community. With the hospital project, I was invited to be part of the design process from the ground up. I attended the groundbreaking last year, a project that brought home the connection between my work and my father’s. I’ve also worked with some of this organization’s other facilities to see how storytelling can enrich patient-doctor relationships and ultimately improve medical outcomes. As an institution, ISC has long been involved with regional health care. I think it originally started with a storytelling TV channel in a hospital, and grew into a relationship that has been evolving for a long time.

About a year after the groundbreaking, and before we made the site visit to the new hospital, I saw the architect’s plans in an office in Erwin, Tennessee. When I noticed a certain indentation, Eric, the manager of the project explained it’s a courtyard. I told him the story of my dad and the tree, back so many years ago at the Mazda plant. Eric took me to the site, about five-minute drive from where we were (and not too far from where I often go camping and rafting). It looked very different from when I had seen it at the groundbreaking. On the actual site, we envisioned some of the spaces we were planning together. The site manager gave me a tour of the facility, including some of the outside spaces and the courtyard. We began to imagine other spaces dedicated to storytelling, like an amphitheater for patients and staff to see performances and outdoor film showings, which could also be used to host other types of community events. Eric talked a lot about how the site was going to be more than just a hospital; it would be a true center of health and well-being.

ISC will make an official announcement soon, but in the near future this hospital will be part of an important new partnership like the one we did with the Dollywood DreamMore Resort. It’s been exciting to think more about what storytelling means in a new and different context. I may not be able to literally redesign a building like my father, but it felt good being involved from the ground up, thinking about the design and making sure that storytelling is embedded into the very fabric of the facility. We’ve also been thinking about ways that storytelling can help foster healing and well being, dialogues between patients and doctors, and other ideas, including a concept for a mini-museum dedicated to the idea of storytelling as a medicine. How should we think of storytelling as medicine in today’s world? How can it help address the obesity crisis, the opioid epidemic, or early mortality rates? And how can we help tell patients the story of the particular place where the facility is located, its rivers, and its landscape? In a way I like to think of storytelling as the old tree this new place is built around, like my father’s challenge at the Mazda center.

All of this has been an incredible exercise, thinking critically about how the old art of storytelling fits in into the cutting-edge world of medicine. But it’s also been a personal pleasure, doing this work and reconnecting with my early childhood memories of my father’s work.