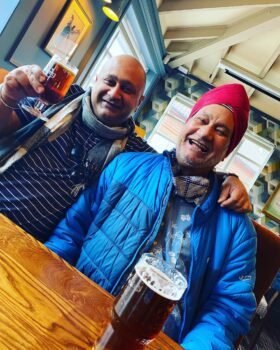 I’m writing this blog from my dad’s house, in England. As many of you know, I’m originally from the UK. The last time I was able to visit was just before the pandemic, which means I hadn’t been able to see my family for two years. My dad isn’t much of a Zoom kind of guy. But we often talk on the phone when I’m on my way home from work, or during my lunch break.

My dad has had some health challenges this year, so I was especially keen to visit. The Omicron variant added an extra layer of stress to the travel experience, especially because I had to move up my flight at the last minute. The international requirements meant that I needed to get a PCR test and triple-check that I had the proper documents—plus I had to quarantine after I arrived in the UK.

Visiting England is always an interesting experience after having lived in the US for so long. I’ve had to relearn driving on the left side of the road, for instance. I don’t have a cell phone that works in the UK, which helps me unplug. Supermarket trips feel like the international section of the Johnson City, TN Kroger has taken over the whole shop. I love shopping for all the chocolates and tea and goodies I grew up with. Soon after I arrived, I treated myself to a cup of tea and a flaky sausage roll from my favorite bakery. I’ve been enjoying Indian home cooking, good old fish and chips, and even pickled eggs wrapped in paper with a lashing of malt vinegar and salt. Americans often complain about British food, but I think they’re just not going to the right places! You can’t beat a plate of bangers and mash from the local pub, and it’s great to just walk there instead of having to drive.

Of course the biggest highlight has been spending time with my dad, who has always been my hero, my strength, and my rock. His home has been like a magnet for me as I’ve traveled the world and settled on another continent. It’s always been this way for me. Wherever he is in the world is what I think of as home.

My dad has never been one for big gifts or fancy things. He prefers to show his love by being present. He’s always up for a good conversation. He loves to get a pint of the local bitter, or a good old-fashioned IPA at the local pub—one of our first priorities after I arrived.

I have thought about that a lot, this idea of being present, during this trip. Once I heard His Holiness the Dalai Lama give a talk. Someone asked him a question about the best thing we can do for aging people. The Dalai Lama replied that it’s our job as children to help ensure that the process of aging is as smooth and stress-free as possible. That’s not always easy, but it’s a sacred responsibility. So I’ve tried to keep my patience, even when dad makes fun of my driving (which he does often, even though I’m 45 years old).

When I looked around his garden, I noticed that my dad has kept much of my old artwork, including sculptures I made in college. When I flip through his architecture books, I find my old handwritten letters, schoolwork, and drawings. My dad is an architect, and when I was a kid, he gifted me with my first ever sketchpad. I always thought of him as an artist, even though he was more of an architectural technician.

Growing up in a seaside town in south England as a little boy, it was always a comforting feeling to go to bed knowing that my dad would stay up late working in his study. I could always see a light from his study through the gap beneath my bedroom door. He’s a draftsman, so he used to work on one of those big drawing boards. Later, as an adult, I’d call him at his office. Every time I asked him what he was up to, his reply was the same: “Oh, you know, son. Drawing lines.” That joke never gets old!

For this visit, I’ve set up a little office adjacent to his study so I can connect remotely with the ISC team. It reminds me of how, when I used to call my dad at work, he’d pick up and say, “Hello, Mr. Singh.” And I’d always call him “Mr. Singh” back. That joke never gets old either. But since my temporary office is so close to his, we just pop our heads around the corner. “What are you up to?” This is almost always followed by, “You making tea?”

My dad has always been proud of me, although it’s not always in the way I expect. In 2014, a year after I first came to the US, I was asked to give a talk at the United Nations Headquarters in New York City. I was incredibly excited. When I phoned my dad to tell him he said, “Son, are you on holiday?” He didn’t quite get it. But during the same conversation, he reminded me of a local publication, a type of newsletter, where I had appeared some years ago. It was deep in the pamphlet, maybe a tiny write-up about something I had done in Scotland. But dad had preserved it with pride on his bookshelf. That’s the kind of thing that makes him proud. I think that has helped keep me grounded.

My dad has always been a great storyteller, particularly when he has a nice IPA in front of him with some fish or masala chicken. These days, I make an extra effort to preserve these things. It’s so easy to whip out my phone and press record. (There’s no need to set up a big interview when you have a dinner table.) More often than not, one story flows into the next. My dad’s storytelling is firmly based in his values, kind acts, and presiding care. And I love picking out old photographs to go through together. Each one sparks another story that my dad has to tell. These stories are like the lines he used to draw for work, coming together to build a three-dimensional model of his life. He was born in India, raised in East Africa, and he and my late mother became political refugees around the age of 21. So every story is part of a larger map to a shared heritage spanning those three ​continents.

The holidays can be great for a lot of reasons: the nostalgia, the music, the food. I love the mince pies and bright lights. But I also quite like the opportunity of being truly present with the people I love.

Despite all the challenges, it’s been so nice to just walk to the local pub with dad and rekindle our story live and in person, after two years apart. I wish the same for you and your family, whether it’s this year or sometime soon. Happy holidays.