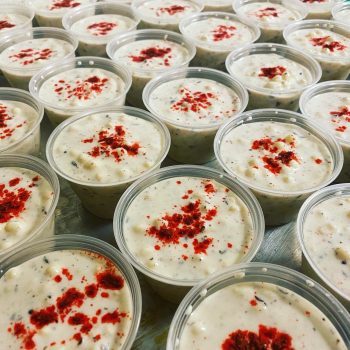 I normally spend a lot of time traveling, but I’m not on the road much these days. My work requires giving talks at conferences and events. COVID has ensured that I stay put a bit more, which has given me a chance to appreciate the unusual experience of staying in one place.

For over a year, my friend Shelley, who manages the Boone Street Market in Jonesborough and the “Jonesborough Locally Grown” project, had discussed the idea of me being an invited chef to cook for the community, a fundraiser for the local community and Boone Street Market. I participated in a similar event some years ago, making “Mountain Masala”  as part of a community fundraiser. This new fundraiser was similar, with the added challenge of how to work through the logistics in the middle of the pandemic.

Boone Street Market is a year-round farmers market, a brick-and-mortar store. Local farms supply the produce, and the proceeds help their operations. The business is set up as a nonprofit (much like we are at the International Storytelling Center), with the mission of supporting local agriculture and local farmers, as well as promoting healthy eating and educational awareness around good food and nutrition. As a shopper, I absolutely love going to the Boone Street Market. Sometimes when I leave work, I’ll stop by to pick up a little something: a bit of chicken broth to fight off a cold in winter, banana bread for a potluck (when we had those), or just a treat to take home. Everything is super fresh and homemade.

So recently, when the folks at Boone Street Market reached out to me and ask if I would cook an Indian meal as part of a fundraiser, I happily agreed. For once, I had the time. And more importantly, I knew how much everyone here (including me) had been missing shared community experiences. We decided on a day and went back and forth a couple of times on the menu items. The dinner was scheduled on a significant day for me: the day before my late mother’s birthday, and the ninth anniversary of the day I arrived in the United States to start work as a graduate student.

A love of cooking was something that my late mother passed on to both me and my older brother, who makes his living cooking family-style Punjabi food in England. (He owns an Indian street food company.) We have both found the passion of cooking—and the stories that go along with the food—to be such an inspiration, in the kitchen and beyond.

The Boone Street Market event felt like the perfect way to support my community during a difficult time. I grew up around large communal food gatherings; often my family would get together and do all the cooking ourselves, in large cooking pots called patilla. I felt like this community event was a way to honor that family tradition, remember and honor my mother, and also honor the community that I now call home. I’ve long thought of food as a way to bring people together, build peace, promote justice and equality, and strengthen relationships. Fundamentally, food is an expression of who we are. So it can really help us get to know one another.

After the menu items were in order, the real work began. The staff at the Boone Street Market helped me do the prep work. One of their jobs was to make sure that the ingredients come from within 100 miles of Jonesborough, so that everything was very fresh. (Much of the food was gifted by the farmers, who wanted to contribute to the fundraiser.) This leg of the project is part of a broader local initiative called the Locally Grown Project, which is like the outreach component of the Boone Street Market.

Normally an event like this would bring together about 40 people to share a meal, with a guest chef present to talk about the food. But these times aren’t normal, and we had to find a new way to operate that was compatible with social distancing. To tell my diners the stories behind the food they were eating, I pre-recorded a message in ISC’s theater with the help of one of our interns (Elliot Childress, who just so happens to be the son of Karen Childress, one of the founders of Boone Street Market).  I told the story, under 10 minutes long, about my food and why it matters—all on the stage where our storytellers usually perform.

The main dishes we decided on were a lamb curry and a seasonal vegetable curry. We also made aromatic basmati rice, a boondi raita (a yogurt chutney with fried chickpeas, mint, and lemon zest), and halwa, a carrot and cardamom dessert. For a southern style twist, instead of naan bread or roti, we made a tandoori spiced Southern cornbread—a new dish I developed specifically for the event.

Initially, the meal was planned for 40 people; that was the number of tickets available when we put the advert out. But those tickets sold out within 24 hours, and I started hearing from people who wanted to participate. They asked how they could get a ticket. I knew I could make it happen if I had a patilla that was big enough. We increased our capacity by another 10, which quickly turned into 20 because of additional staff and volunteers. I always like to make a little extra just to be on the safe side. I was raised to always make more in case of unexpected guests.

I started cooking on a Thursday with my sous chef Beth. I needed an experienced hand in the kitchen, and the preparation would take several days. The first thing to do was to get all the ingredients ready for the tomato base (for the sauce), and also brown the meat. The meat had to have enough time to soften, at least 10 hours to simmer to perfect tenderness. It took about four hours in the kitchen just to brown the meat and make the base for the sauce (which is so important in Indian cooking). My mother had taught me how to make it, almost like an apprentice. I was the official taster, who would try the sauce and tell her what it might need. As a kid I’d say things like, “More salt, I think!” but I never knew what I was talking about. Over time, though, I came to learn if it needed salt, chiles, or other spices. Developing a palate takes patience and practice.

When I was a kid, my mom used food in creative ways to build community. I was the only Indian kid in my school (and we were the only Indian family in my town), but the elementary school was right across the street from our home. My mom made special dishes and invited the teachers and kids over. Our backyard was like a culinary teaching school. All the kids would sit on the grass and teachers on chairs, and mom would show them how to eat the food with their hands, the traditional way. (Of course my mom was cool, so I got to ride off that a bit in the playground!) She was breaking down barriers.

Back to the kitchen at Boone Street Market. Cooking is much like storytelling. It’s a very intuitive process. I cut up onions, garlic, ginger, and roast cumin seeds and mustard seeds in a pan. I love the sounds and smells of food as it sizzles. The garlic always goes first, then the ginger, and finally the chilies. Then other condiments like cloves and cardamom spices.

We let it set up overnight. The next morning, when I came to Jonesborough, instead of coming to the office I went straight to Boone Street Market. It’s a professional stainless steel kitchen, so everything I needed was there. After I got the lay of the land and figured out the cooking plan, we got busy. We put some music on, a South African radio station. Beth grew up in South Africa. The culture there is very similar to British culture, so the music station was playing old classics that I remembered. Singing along was a really nice way to connect. But when I’m making sauce, I like there to be complete silence so I can concentrate on making it right. (Chef’s prerogative!) Being distracted can affect the cooking process and ultimately the taste of the food.

Once the lamb was simmering in the sauce, I could focus on the vegetable curry. I added okra, sweet potato, zucchini, and chickpeas, and chopped some cilantro to use as a garnish once everything was ready. The big pot needed to be stirred every five minutes or so. At length, I shifted my focus to the other menu items, including the tandoori-style cornbread. I asked for help because Beth is good at making a traditional Southern-style cornbread. Once the mix was ready I could add the red tandoori spices. (It was very red.) After it went in the oven so I started to work on the Boondi Raita using goat’s milk yogurt, which was a lovely nice compliment to the colors and textures of the lamb and veg curries.

We started the rice in the early afternoon. (Timing is everything with a big meal like this.) To make it nice and aromatic, we used basmati rice, which is ideal for Indian dishes. I fried cinnamon sticks and cardamom and mustard seeds and cumin, and added the rice (which had been rinsed numerous times to remove excess starch). You want to make sure each and every grain is flavored before you add the water. A bit more cooking, and it all turned out very well.

All of the people who had bought tickets needed to pick up their meals so they could take them home to eat. This presented some logistical challenges, but we created a chain line that went from the stove, through the kitchen, to the pick-up station, where we could say hello to diners as they picked up their food. Everyone received a beautifully designed menu and a link to the prerecorded story of me telling the story of the food. I was able to greet everyone, answer questions for the folks who were new to Indian cuisine, and talk about the ingredients and inspiration that went into the dishes. It was a chance to see old friends and colleagues. And I know at least one person picked up an order to deliver to someone who was in the hospital. I met some new people, too.

Over the next few days, the comments started pouring in via email, text, and social media. My friend Virginia Kennedy, who sent me a lovely, thoughtful email that included photos of how she had transferred the food to a fine china place setting. She shared a bit about her own family’s cherished food traditions.

I heard from a lot of happy customers. But the truth is, I think I was the one who got the most of out of the experience. I got to honor my mother by cooking for the community. I got to mark and celebrate my nine years in America. I had the chance to connect with friends, have fun in the kitchen, and raise money for another nonprofit. I even got to spend a day out of the office exploring storytelling in the kitchen instead of from behind my desk.

The pandemic has imposed new restraints on how we spend time together, and we’re all feeling it more acutely as we head into the holiday season. But finding creative ways to share the traditions and dishes that matter to us with the people in our lives can bring its own kind of joy.