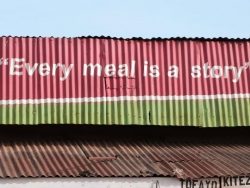 In 2012, a few years ago before I came to Jonesborough, my brother, my father and I took a trip to Uganda to celebrate my brother’s 40th birthday. It had been 40 years since my parents were expelled and became refugees to the UK in 1972. My brother was just a baby at the time, and he had never visited the place of his birth. It was also a chance to visit the place where my late mother had grown up. I had never been to Uganda, but I’d heard so many stories about it from my family.

We all met up at London Heathrow airport and flew out together. As we drove on the road between Kampala and Torono, the town on the Kenya/Uganda border where my mother grew up, where my parents were married, and where my brother was born. We stopped at a side street market in search of Uganda red chilies, and I noticed a sign above the storefront that read “Every meal is a story.” I took a photo of it so I could remember that moment.

At that time, I was already in the United States studying folklore in North Carolina. I had started to learn how the traditions of our everyday lives—the foods, rituals, beliefs, and other cultural markers we use to express our values and identities—tell the world about who we are and where we come from. Like the oral tradition, the food tradition (or “foodways,” as we’d say in folklore studies), really does traffic in narrative. It’s like the sign I saw in Uganda said: Every meal is a story.

When we finally arrived in Tororo, an older Ugandan gentleman came up to us and said, “Welcome home.” That was such a wonderful moment. He was someone who obviously knew why we were there. He had probably grown up alongside many of the Indian migrants that first came to East Africa to help build the railroads—as my family did when it was a British colony.

In Britain, I grew up in a powerful tradition that frequently involved cooking with our large extended family. Often we’d have hundreds gathered to prepare and cook. Many of us from different families would gather for all types of events, including Diwali, Eid, Christmas, weddings and funerals.

My mother was my primary teacher in everything from art to cooking. She’d invite me to join her as she prepared the meals in the kitchen—a lesson that was always accompanied with family stories from our heritage.

I’d cut up the onions and tomatoes. Once the main tomato masala base was made, my mum would take a small scoop, put it onto bread, and ask me to taste it to see if it needed any salt or added spices. I was honored to be her chief taster. She’d repeat the spices like a poem: Haldi, Lune, Mitch, Masala. That was the order of the primary spices that should go into the base curry. It had a ring to it.

Later, I learned about cooking from my dad. For some years my mother was ill, and spent time in hospital. My dad would prepare a crockpot so us boys had something to eat when we got home. He said that every man needs to learn to cook in case the time came we needed to look after ourselves and cook for others.

When my mother passed away at a young age, my aunties would often prepare homemade meals and freeze them for us to reheat. After a while, I asked them to stop—not because I wasn’t grateful, but because I wanted my family and especially my dad to have the smell of home cooking being prepared. It was the smell of these foods that warmed the house, and the stories that accompanied the cooking that made a house a home. I took over the role of my mother and cooked for my older brother and dad. I’d call them daily to see what they wanted to eat when they got home.

As an 18-year-old, I spent some time with my grandmother in northern India. Every day she’d get us kids to wake up early and clean the entire house from top to bottom. Then she’d call out to me in Punjabi to make tea. My job was to make milky chai tea for everyone, and we’d all sit out on the veranda drinking it. Later she’d spent the entire afternoon preparing food. I’d watch her as she cut up spinach leaves to perfection, and listen to her tell the stories of our grandparents and the struggle for independence that was taking place when she was a child. In the evenings we’d watch as she’d cook on a clay over fire on the veranda roof top. The smell was incredible, almost sweet and peaty. Cow dung was often used as the fuel to burn the fire—a smell that is familiar in many rural parts of the world. I’ve smelled the same smell in Ireland, in the mountains of North Carolina, and now in East Tennessee.

Since I moved here a few years ago, I began to learn how to grow my own food thanks to the friends I’ve made. The first batch of tomatoes I got to grow from seeds to fruit, I made a large batch of Indian Punjab sauce and packed it up in small mason jars. I put them out on my front porch and invited my neighbors to come and take them. They were all gone within a few hours.

Since I travel a lot, it’s difficult to maintain a backyard garden. So I purchased two local allotments where a friend teaches local high school youth how to grow their own vegetables. I received a small box of these vegetables every week delivered to my front porch—a win-win arrangement!

Recently a friend who runs a regional non-profit food initiative and I cooked up the idea to make an Appalachian-style curry community dinner as a fundraiser for local farms. It became a community effort, with kids and farms involved. A number of the young apprentice chefs joined me in the kitchen to prepare a meal for 150 people. These high school culinary students said it was their first time trying or cooking a curry. It was a real pleasure to invite them into the kitchen. Now I had my own crew of chief tasters. As we worked, I shared stories with them about my home and the years I’d spent cooking.

They also told me about why they are passionate about cooking themselves. Austin said for him it was so that he can learn how to survive on his own. Cooking was building his confidence. Aaron said that his favorite food was burgers, but now that he’s learned to cook a traditional curry base, he wouldn’t mind trying to make curry burgers.

I taught them my mother’s spice mantra: Haldi, Lune, Mitch, Masala. They loved it.

That evening, along with the support of my young helpers and a friend of mine who’s a chef—Seelye Coombs of Jonesborough very own Boone Street farmers’ market—we shared and dished out our first Appalachian curry dinner in sight of Buffalo mountain, which overlooks the community where I live. It had all the same base ingredients that would go into a traditional curry, but we added things like okra, carrots, sweet potato, eggplants, and other vegetables that had been grown locally. We named this a Mountain Masala. It was a hit.

Like our stories, food is something we can share to build common ground and to connect with one another. Whatever’s going in to the world, we can invite a neighbor and friend or even someone who has a very different view of the world to share a meal and break bread. In the Sikh tradition, we consider serving food to others and siting down to eat a meal with others as one of the highest forms of prayer. On some level, that’s a tradition that crosses all faiths and cultural backgrounds. Having worked on various peacebuilding efforts, I often ask participants to tell me stories about food. Again, I remember my sign: Every meal tells a story. I’ve always liked how each day—breakfast, lunch, and dinner—has a beginning, a middle, and an end.

With everything that’s going on in our world, one of the simplest, and most powerful, things I believe we can do is simply to enjoy a meal with a friend or even a stranger. Whether you’re breaking bread or sharing a curry, it’s one of the best times to share a story.

This past week was our first inaugural Appalachian curry dinner. But I have a feeling we’ll be doing this next year, and for years to come.