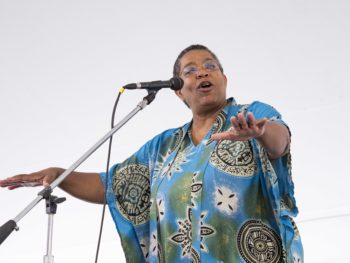 This year’s Festival marked the kickoff of ISC’s new “Freedom Stories” project, which we introduced with a special set by master storyteller Sheila Arnold. I had the honor of introducing her, and in preparing my remarks I found myself thinking about the remarks of Alex Haley, the famous author (and a fellow Tennessean, as it happens). When Haley performed at the Festival back in 1986, he said “Without storytelling we’d have no roots.” It’s a memorable phrase, and I quote it often.

One thing about roots is that they’re not always pretty. And even though roots are so important—vital to life—they often remain hidden from view.

“Freedom Stories” is our attempt as an institution to examine the roots of storytelling in our region, even when they’re ugly. Through this program, we hope to engage US history, as well as the real history of the region—not just the comfortable and happy stories about it that have been told and retold. We know it’s long past time that these stories were told, and we’re proud to help bring them to you with the help of a generous grant from the National Endowment for the Humanities.

Over the course of this two-year initiative, we plan to seek out and shine a spotlight on some of the underappreciated and neglected stories of African Americans across Appalachia. The project is an unusual combination of performance and discussion, connecting prominent African-American storytellers with humanities scholars and community experts. Together, we’ll trace the rich history of African Americans in Appalachia—from the first African arrivals in Appalachia, to the shaping of a distinct culture, to the struggles for freedom and equality. Watch this space for podcasts and other multimedia resources to make our live events accessible to a wider national audience.

As youngsters in history class, we learn that the US was founded in 1776. That’s what we celebrate each Fourth of July. But we wouldn’t be who we are—this country wouldn’t have won its independence—if it wasn’t for the people who were brought here much earlier, starting in 1619. We’re proud to join other institutions who are working to bring this fact to light. Over the summer, The New York Times launched the “1619 Project,” where they’re taking a hard look at the legacy of slavery. The Washington Post is doing something very similar.

I was struck by this quote from the Times: “The 1619 Project…aims to reframe the country’s history, understanding 1619 as our true founding, and placing the consequences of slavery and the contributions of black Americans at the very center of the story we tell ourselves about who we are.” “Freedom Stories” aims to be part of this great reframing. We’re focusing specifically on our region to better understand the stories that make us who we are.

Our goal with “Freedom Stories” is not to abandon the stories we know and cherish, but to bring other stories to the surface. This can be challenging, in part because not all of these stories are celebratory. Some are dark, and they’re full of cruelty and injustice. But they urgently need to be told—and heard.

In our capacity as an internationally renowned arts and cultural organization, ISC has always worked to increase representation and diversity. But we also recognize the need to push the boundaries much further. We need to have the courage to explore stories that are uncomfortable and unflattering. “Freedom Stories” has been designed to confront the question of: Who are we really, as an institution? What are we about? And are we living up to our own mission and vision every day? Which stories have we been neglecting, as a country, as a region, as an art form, and as an institution?

With the help of storytellers like Sheila Arnold, “Freedom Stories” will unpack these big ideas over the next two years. Crucially, we plan to share previously unwritten histories. These are essential conversations to have, not just in the arts, but in this country. This very region was the site of some of the best and worst of humanity, from the nation’s first abolitionist newspaper to the lynchings that took place near the ground where we work and live. All sides of these stories are essential to understanding the story of us.

Sheila’s set, which we’re featuring on our YouTube channel, is interesting because it makes you, the listener, interrogate your perspective. The history of our culture is complex. The historical figure from her first story, Elihu Embree, embodied that complexity. Embree was an ardent abolitionist who owned slaves, sold and separated them, repurchased them, provided for them in his will, but ultimately did not let them go free. How did his slaves reconcile his devotion to the cause of their freedom with the fact of its lack? And what are we to make of it now? In exploring these questions, we couldn’t ask for a better guide than Sheila, who not only is deeply involved with historical storytelling, but also stayed at Elihu Embree’s renovated home (which is now owned by Pat and Patricia Stearns) during her first time performing at this Festival. She’s a current research fellow at Mount Vernon, George Washington’s home.

The next time you have a few moments, I invite you to watch our video of Arnold’s performance and listen with an open mind. This is a process, and it’s one that we can embark upon together.