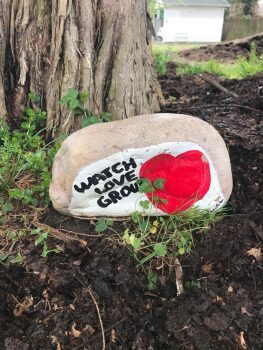 I’m still overwhelmed by the way people welcome one another in the mountains. I gave a talk recently at Johnson County Center for the Arts in Mountain City, a tiny town about an hour’s drive from Jonesborough. It was a fairly informal conversation about why the arts matter. But even for such a casual event, their hospitality was incredible. Our region here in Northeast Tennessee is steeped in tradition, from the way people greet and welcome one another into their homes (or other spaces) to the pies and cobblers they serve for dessert. Heritage and art have always been intertwined, and both have been historically connected to the land itself, the mountains.

Growing up in England as the son of immigrants, I remember thinking that art was something that other people did—something that white men did, if I’m really being honest. For people like me, art was something to see at a museum. As an adult, I began to understand that art is in fact everywhere; it belongs to everyone, and is something that can exist in the context of the world around us, as well as on a museum wall. In the past I’ve worked as a museum curator, a teacher and as a folklorist, and I’m constantly reminded that art is in our poetry, food, dances, quilts, stories, and other traditions. Art is a connecting force. And once I started seeing the world in this way, I saw my own experiences as art, and began to see the creativity in everyday mundane tasks like cooking, or in gatherings with family.

A friend of mine had helped set up the art center, the county’s first, with a lot of other committed people. It was designed as a place for artists and art lovers to gather, talk about the world, and connect with one another—and also invite outsiders in and make them feel at home. They see art as something that belongs to everyone, and I was honored to be a part of that. Art, artists, festivals, and spaces like this center—all of these are things that help communities flourish. It is what happened in Jonesborough 47 years ago, when a dying mountain town decided to create a folk arts festival called the National Storytelling Festival. Art was not only a powerful tool for revitalization and development, but also for people and places alike.

“Creative placemaking” is the fancy term for this phenomenon I’m talking about, but often I wonder if it’s just another way to say “home.” Whatever you want to call it, creative placemaking is a subject I often return to in my public speaking engagements. In fact I talked about it recently at the Creative Placemaking Leadership Summit in Columbia, South Carolina, an event that brought together artists, town officials, health practitioners, city planners, community members from across the South, and representatives from various national arts agencies. There were nearly 300 participants representing 180 organizations from 21 states.

Placemaking is a topic that has resonated with me recently, as I just bought my first home in the US. (I actually signed the papers last year, on the day before the National Storytelling Festival. Talk about multitasking!) The house is just a few blocks down the street from the first place where I lived when I arrived in East Tennessee in 2013. One thing that has helped it feel like home is I’ve been learning to grow a garden with six raised beds I inherited from the last owner. It’s a bit different than working in my community garden, where I already owned two plots. A friend of mine who’s a gardener uses the plots to teach kids how to grow food, and then I teach them to cook. One of our dinners years ago (“Mountain Masala”) inspired an annual tradition called Appalachian Fusion, where amateur chefs use local ingredients to create a culinary experience for the community. Community spaces like this actually share a lot of common ground with the art center where I spoke. So much is built on mutual cooperation.

As I was thinking about what to plant, a community gardener friend told me to wait and see what grows naturally, a technique based on permaculture. The premise is simply to allow whatever nature thinks should be there rather than imposing our own will on the land. I’ve been realizing how permaculture and gardening require learning to wait and build patience. It’s actually a lot like the writing process: you wait to harness the stories that already exist inside. You see what emerges. And sometimes you just let experiences become compost for something else later.

Meanwhile, other things grow around you that are exciting to see. My backyard is surrounded by tall trees, and in the morning, I like to sit in the back garden. I can hear mockingbirds and blue jays sing, and I often see all sorts of other birds swish in and through the garden. When I get up very early I can hear their chorus at dawn. Recently I noticed some tulips growing and a small batch of bluebells had arisen from the ground.

On my way back from the creative placemaking summit, I had arranged to participate in an event called an Earth Skills gathering in a rural spot near the border between South Carolina and Georgia. Storytelling is considered an earth skill, and so I’ve been invited to give some workshops and talks at similar events over the last few years. They’re typically outdoor events that last for about a week, but I attended this gathering for a few days. I would learn about ancestral life skills like woodcarving, medicinal herb gathering, fire making, and building structures that complement the natural environment (instead of disrupting them). These are basically all the skills we need to not just survive, but also thrive. I took a bamboo flute-making workshop from an elder called White Eagle, and also a workshop on birdsongs from a person who had learned to track deer by listening to birds. Everything is interconnected, so a lot of the skills focus on how species share soundscapes to build a sense of place and community with one another. Some sounds or songs are about survival, and others are about celebrating life.

The second day of the Earth Skills gathering I woke to heavy rain. By midday the rains had made a sort of river through the middle of the field. There was also the real river, which had become heavy and thunderous. Some people were trapped between the two bodies of water, and we spent most of the day crossing the waist-deep river back and forth to help everyone—people, kids, animals, and all of their belongings—who needed to get to higher ground. We had to carry things over our heads. I personally hauled tarp, blankets, food, and other belongings, and we even helped a tiny snake find its way to dry ground.

A local farmer told me it was the worst flooding he had seen in the 25 years he has lived and worked there. Despite all of this, we managed to bring everyone to safety. That night, the rain finally stopped. We sat around a fire that had been going strong all day, even in the rain. We dried ourselves and shared a meal. We also shared some stories—stories of the day we’d had, and stories about ourselves. Despite the circumstances I think most of us considered it a beautiful day. After we finished eating, we shared more stories and poems.

The next morning, even though it was still a bit damp, I went ahead with my storytelling workshop as planned. But since the focus was community building, I couldn’t help but feel like we’d already lived through the workshop the day before. It had been a crash course in Earth Skills and building connections between people.

On Sunday, the last day, we gathered around the fire for a final time. It had been lit on the previous Monday, days before I had arrived. It had actually been started by an indigenous elder with a bow. His name was Snowbear, and he was one of the founders of the original Earth Skills gathering 30 years ago. That fire had stayed lit through all the rains, even though at one point it looked as though it was floating in the middle of the river.

Before we left, Snowbear reminded us that, just as rivers come to renew the earth, we come together to renew one another. He asked us to close our eyes, and remember the story of our time together. His last words were, “As the river renews the Earth, may the Stories we tell renew community. Celebrate one another.”

When I got home, I noticed the trees had filled out more. They were greener and more lush than when I had left the week before. I unpacked my car, and dumped my dirty laundry near the washing machine. As I made myself a cup of chamomile tea and sat in my backyard to play my new bamboo flute, I noticed that purple irises had emerged in the garden, right next to the bluebells. I was grateful to be home. There really is art in our everyday lives, and I believe that we’re all here to nurture it, and help it grow.