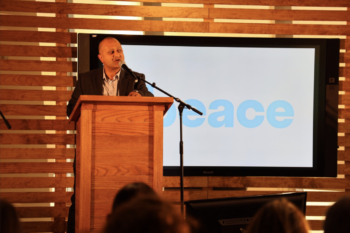 As the year comes to a close, I find myself thinking about the launch for the +Peace Coalition action network that I attended in New York City a couple months ago. It was the first-ever gathering ever of nearly 20 of the largest peacebuilding organizations in the world, and I was invited to be the opening speaker. The coalition was developed to address some pressing and alarming realities facing our world today: violent conflict is at a 30-year high, and more than 70 million people have been displaced around the world. Meanwhile, levels of polarization and tribalism are growing worse.

I was there to talk about the importance of storytelling, and what role it has to play in building a better world. The event was on the 48th floor of SAP, a sort of social innovation hub, and we couldn’t have asked for a more inspiring view. The building overlooked the Hudson River, and you could see the Statue of Liberty, the Empire State Building—pretty much a 360-degree view of the city and the historic area of Hudson Yards.

The event was organized by a long-time friend and colleague of ISC, Julia Roig from Partners Global, with whom I did a fellowship when I was still a graduate student. Through Julia, I met Melanie Greenberg, who eventually became one of our board members and helped us build synergy over these last six years, particularly with the international development and peacebuilding sectors here in the US and in various places across the world. Also present was Uzra Zeya, the new CEO of the Alliance for Peacebuilding, a sponsor of the National Storytelling Festival. Professional collaborations and conversations have existed for a while between our organizations, but we have also built friendships. Often we just pick up the phone and talk to one another. And of course sometimes we network and look at opportunities for grants or funding opportunities. A few years ago, we all worked on a project with the Department of Defense at the Pentagon. This launch was, in a sense, a continuation of that work, pressing for strategic and systemic change. The coalition serves as a way of looking at direct actions in the hopes of bringing more people into the field to understand we are all peacebuilders, whatever sector we work in or whatever disciplinary background we may have. You don’t have to be trained in peacebuilding or go live in DC or work at any of our organizations to be involved in the peacebuilding process. This is a movement for all of us.

A question that we’re always thinking about is how to reframe the narrative of peace. What is the story we’re trying to tell, and what are the most powerful ways to tell it? This event approached that question in an interesting way. There were marketplace-style booths with different organizations showcasing their work. There were also “dialogue sofas” and “peace sofas” where people could talk about difficult, divisive issues such as gun violence in America. People on different sides of the issue could sit and talk. The sofas were gifts and came from people’s actual houses, symbolizing the fact that all of us can do this kind of work, even at home. There was also a hackathon for young students, in which they could create peacebuilding initiatives in the digital arena and then explore their ideas with the support of a media partner.

The ISC booth had lots of space to showcase our Europa project as well as Freedom Stories and Stories for Change. We also showcased work around the National Storytelling Festival, our flagship program, and Storytelling Live. It was a wonderful networking opportunity as well as a chance to showcase ISC and how people can become more involved in the storytelling and peacebuilding movements.

When I had a bit of free time, I took the free ferry to Staten Island that goes past the Statue of Liberty. The last time I had taken that boat was when I was 12 years old. It was the first time I had ever been to NYC, and I was in absolute awe. It was full of iconic places and iconic images from all the movies and TV shows I had grown up with. These days, having been to New York many times (on vacation, for work, for events), I arrive with a different framework and a new sense of optimism. It’s inspiring to see young people taking to the streets and not allowing the story of climate change to go untold. Young activists such as Greta Thunberg, whose trip coincided with mine, have been changing the story. She sailed across the Atlantic Ocean in a no-emissions sailboat to be part of the cause and to remind world leaders that they have a responsibility to our planet and for the survival of humanity—a journey that reminded me of Gandhi’s salt march. There were almost 4 million people around the world who participated in that climate action strike. It was a powerful moment for me to be part of, to stand in Battery Park and hear the speeches from Greta and many other young activists, including indigenous people and speakers across generations.

After giving my talk and a few more days of reconnecting with friends at StoryCorps, the National Consortium for Creative Placemaking, and some other colleagues, I made my way back to Tennessee, where I spent some time writing, doing a bit of thinking, and catching up. I always like to do some of the tasks I often don’t get to do in the office, like reading long articles or thinking a bit more about strategy and planning, and preparing notes. Sometimes it’s easier to catch up when I’m outside the office than when I’m inside the office. (I’ve talked to many others who feel the same way!) I love being in that “space between”—liminal spaces like the airport, or (for many) that time between Christmas and New Year’s. I find that liminal spaces ignite creativity, so it’s a great chance to reflect.

When I was preparing to give my talk in New York, I couldn’t find a quiet spot to practice. I thought to myself, “Well, everyone else seems to be talking in the street and there’s loads of noise. Why don’t I just practice on the street corner?” So that’s exactly what I did, outside my Airbnb, just a few blocks from where I was going to present that evening. It was totally fine. I got to read aloud and people just looked and smiled and carried on. That’s NYC for you. It’s a place where you can do that sort of thing and not feel silly about it. Maybe there’s a metaphor in that: preparing for a talk on peace on a very busy street corner. Carving out some space to dream in the midst of great distraction.

I’m excited about ISC’s peacebuilding work and the opportunities we’ve had to collaborate with partners from so many interesting disciplines. To be able to merge these disciplines and create a new story about the future that’s inspiring and achievable and something to work on in the new year is a hugely important task.

As storytellers, story listeners, peacebuilders, activists, artists, veterans, funders, teachers, journalists, we’re all in this together; we all want to build a better world. The place to start is in the moments we create together. Stories aren’t just records of the past, or the events of the day. We also want to build stories for generations come along much later, perhaps far beyond our own lifetimes. May we all find peace, or at least moments of peace, in 2020.