Real leadership is about knowing how to listen. I think if we can remember this, we can find a path to lead through almost any situation. This is something I’ve especially found to be true over the last year or so, as we’ve navigated ISC through the challenges presented by COVID. There are entire shelves of self-help and business books about management and
leadership strategies, but the truth is there’s no one-size-fits-all approach. But by putting listening at the center of your leadership strategy, you can readily adapt to any situation. 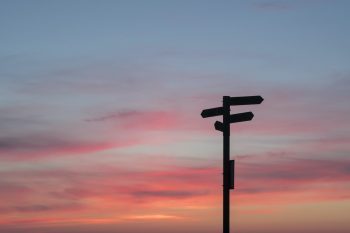 If you’re not sure what to do, you probably just haven’t listened enough. This is advice I have to often repeat to myself, because I’m not a natural listener!

Like so many of nonprofit leaders, I’ve found myself facing a large number of difficult and confusing decisions during the pandemic. Traditionally, ISC produces many live events, including the Festival. The pandemic (not to mention the protocols, which tend to vary from place to place) has made it quite challenging to plan in the manner we are used to. Logistics have been upended. Things that used to be certainties have become variables. All of this makes what used to be routine decisions much more fraught.

There have been various forks in the road where I’ve had to make a big call for the team, like our decision to move to a digital format for our Festival last year, or our decision to have it in person in 2021. Making a choice like that requires going deep: understanding where we’ve been, who we are, and where we want to go as an organization. At times, my staff has been conflicted, and it has been important to take time to explore and process those different viewpoints.

At the beginning of the pandemic, my assistant shared a story about Hurricane Katrina. It was about a disaster relief fund that prepared, planned, and organized their resources—a process that took time. At first, they received some criticism for not going in to help quickly enough. But once they were ready to act, this group served the community there for more than 10 years. Their mandate was not speed, but long-term sustainability. I’ve kept that anecdote in mind as I’ve considered how our actions as an organization impact our community, our region, and the wider world.  I know that storytelling has a hugely important role to play as we, individually and collectively, try to heal from the trauma of the pandemic. So it has been important for us as an organization to always have an eye on the long game.

Over the last year and a half, I’ve done a lot of listening—or at least tried to! One of my staff members paid very close attention to expert advice, reaching out to health authorities, epidemiologists, and state and national experts. She also tracked what was going on around the country not just in the arts, but also in sports and theater. Sometimes at night, I’d walk around my neighborhood to reflect on these reports, and consider how they relate back to our vision and values.

As I considered the different viewpoints of people on my staff, I was reminded of a story from my late schoolteacher, Mr. George. Maybe you’ve heard of it: “The Blind Men and the Elephant.” In the version Mr. George told, four men are blindfolded and sent into a forest, where they’re asked to describe a beast that is unknown to them. (Spoiler alert: it’s an elephant.) Each man describes what he feels, but the picture is incomplete because they’re feeling different parts of the beast. One guy feels the elephant’s leg and thinks it’s a tree trunk. Another feels the trunk and thinks that it has the smoothness of a snake. As individuals, they could only process part of the picture. It was only in describing their experiences to one another that the reality of the elephant emerged.

That, to me, is leadership: putting together different aspects of the truth to formulate a bigger picture. It’s about going into the forest and listening to all four of those blindfolded men and processing their different viewpoints and experiences. Each has value and relevance, even when they seem contradictory.

When I interviewed for this job eight years ago, the last question I was asked was about how I would lead the organization. I thought back to my time in Scotland, when I used to climb the mountains they call Munros. There are hundreds of these Munros across Scotland. I used to get up really early in the morning, when it was still dark, to make a flask of tea and an omelet.  I’d pack it all up and start to climb. It took maybe two or three hours to get to the top. I remember opening up that flask of tea and watching the sunrise. It was an incredible view. After a long time of making it my habit to do this alone, I started leading groups, which was an entirely different endeavor. I recall organizing a charity walk with people who had mixed abilities. I had to think about the challenges of the steep walk, the rocky terrain, and who could navigate what. I had to think about how to keep the group together, and when we needed to stop for a break. And most importantly, I had to think about how to make sure the experience was enjoyable for everyone.

Climbing the Munros with a group took ten times longer than it would have taken if I had been on my own. But that wasn’t really the point. The group experience offered a deep sense of satisfaction and other rewards: a sense of accomplishment that we had done something together, the joy of crossing a finish line with other people to bear witness, and the memories we shared afterward for years to come.

The late storyteller Kathryn Tucker Windham once said that storytelling teaches us to listen. Listening is something that we do with our ears, but we can also do it in other ways—with our eyes and our other senses, and maybe most importantly, with our hearts. This requires a certain openness and humility, as we process other people’s points of view. It also requires time and reflection, and a willingness to turn inward. Part of paying attention to what’s going on around us in our communities and around the world is the simple (but essential) task of remembering to listen to one’s self.

I think that in many ways, good leadership is much like the creative process. I think about Bob Marley, who was apparently a real introvert. A Rastafari scholar named Norman Adams once told me that he had an apartment in London where Marley would stay during his visits to England. When his elders and other people in his community talked about politics, religion, social justice or equality, Marley rarely said anything. Instead he mostly listened. All of this time, he was observing, taking in new ideas, and processing. Making up his own mind. And I think this internal process is something you can actually hear in his music. Marley wasn’t concerned with coming up with a response in the moment, or contributing to the discussion before he had something to say. He let the ideas marinate until they were ready, and then he transformed them into music so people could enjoy and process that information in their own way (as he had).

For us at ISC, the pandemic has been an opportunity to really unpack and examine our values and assets, our strengths and our weaknesses. It’s been a chance to learn new skills and explore new ideas. There have been a lot of things to figure out in the short term. But we’ve also been careful to always keep the long-term plan in mind. Like Mr. George’s story about the elephant, that kind of big-picture perspective isn’t something that we can necessarily perceive alone. It’s the clarity that emerges from having many different kinds of input.

When we’re in survival mode, as we all have been for some time now, I think we often feel a deep sense of urgency to move fast. But it’s also important to move forward in a way that we can sustain, and to make sure we’re not leaving others behind.