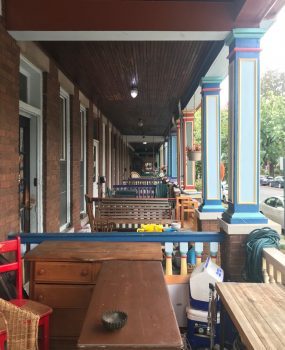 I recently spent five days in the city of Baltimore. The last time I was there I was only 19 years old. It was two weeks before my 20th birthday and I was traveling by myself. I didn’t know anything about Baltimore at the time—just that it was somewhere between New York City and Washington, D.C. The reason I was there was because the year before, my family in England had been granted a green card. My dad had applied since he met a specific category as an east African British Citizen. He had to leave Uganda with my mother and tiny brother in 1972 as refugees fleeing persecution, among the 50,000 people who were expelled by then-dictator Idi Amin. (I wasn’t yet born.) But thankfully no one was fleeing anything this time around. The green card was just a nice opportunity that had presented itself.

We got lucky, and the application was granted for the whole family. As long as it was renewed annually, we could come and go as we pleased. I made some American friends when we visited the states as a family for a few weeks. I was studying for my undergraduate degree in art at a university in the UK at the time, but then I decided to pay a second visit to the US, to check in on my new American friends, as well as some close family friends in New York City. I remember how, in Queens, I got stopped by someone in the New York Police Department. (Apparently I resembled an escaped convict!) It was all very dramatic—as I was walking out of the house to grab a bus to Manhattan, six plainclothes officers emerged from two parked cars with their NYPD badges. It felt like I’d been dropped in one of the American movies I had grown up watching. Quite exciting. It didn’t take long to sort out that I wasn’t the person they were looking for…no Jedi mind tricks necessary, and everyone was amused. I couldn’t wait to tell my friends back at home.

The reason I was in Baltimore at the time was because I had to show up for an in-person interview to get the green card renewed. Baltimore is where the interview happened to be. I flew in, and got a taxi to a motel near the immigration office on the outskirts of the city where the green card renewal interview was to be held the next day. I didn’t know where anything else was, or how to get around, plus I didn’t have a car. European cities are much more pedestrian friendly than most American cities, so I remember feeling surprised by how hard it was to get around. Fortunately, everything at the immigration office went smoothly. I waited in line, my number was called, and I answered a few questions. The whole thing was over in less than five minutes.

Just one week after that interview, my mom died suddenly. I found out by listening to an answering machine message. By that point, I was in Bloomington, Illinois, visiting my American college friends. They lived in a student house and let me have the living room, and the plan was I’d stay and get a job for the summer. Now I obviously had to return to the UK to be with my family, so I had to give up the green card. It would take a long time for this terrible news to sink in, and I ended up staying home to look after my dad—not because I had to, but because I wanted to.

Years later, of course, I would return to the U.S. to study in Raleigh, North Carolina. The day I arrived was my mother’s birthday, and I remember being met with a colorful hummingbird in the back garden of the house where I was staying. It felt like a welcome and a blessing. When I took on my role at ISC, I received my second green card to the U.S. (this time via a self-petition, a process based on my work). It felt like a second chance to pursue that life I had abandoned under such duress as a young person, and also a chance to contribute to something big, with purpose and meaning. It felt like it was meant to be.

Twenty years later after my first trip to Baltimore, I was back, though I was in a different hotel, at a different location, visiting for a very different reason. I was attending a conference, but I’d gone a day early to prepare. At the conference, I was taking part in a series of roundtables at the National Endowment for the Arts’ first-ever national Folk & Traditional Arts Convening. We were there to discuss the shared values of our field, as well as the impact of folk and traditional arts on community life across every state of the nation. Of course my focus was on storytelling and how it will help the nation flourish, but many of ISC’s folklorist friends and partners were there, including people from CityLore, StoryCorps, the Smithsonian Institution, and Library of Congress.

After that, it was immediately onward to the National Assembly of State Arts Agencies (NASAA) conference, where I led a deep-dive workshop about why stories matter for arts, culture and education leaders. The session was designed to model how stories can be used in ways that can help communities heal across political and social divides, and to highlight the value of community-building through storytelling (and the arts in general). I led my peers in a discussion about our united efforts to support healthy discourse and dialogue across the nation—and to, together, imagine a story about the world we’d like to see in the future.

It was absolutely wonderful to be back in the great city of Baltimore talking about a subject I care about so much: helping people tell their own stories, in their own ways, in service of building a better world. It was also a great opportunity to build strategic alliances with like-minded organizations that can help us spread the word of storytelling. I also enjoyed spending time on my friend Dan’s front porch (pictured above). He showed me some of the sites where the TV series The Wire was filmed, which I had watched as a student and loved, and we talked about our plans to collaborate on a podcast about faith and identity in 2019.

As I write this from the Chicago airport, waiting on a long-delayed flight to London to see my dad for his 70th birthday, I’m reminded of a meditation I led at that Baltimore gathering. It feels quite appropriate for this time of year. I adapted it from the Seven Generations, a principle often used by Native and indigenous peoples (particularly the Iroquois people) as a form of guidance and a way to be thoughtful about everyday actions. What we do now should benefit future generations, so they can experience good sky, good land, and good community. I’ve been thinking about this a lot in terms of strategic planning at ISC, because the seeds we sow today will help future generations experience storytelling in all its potential.

Imagine that your past has a shape that persists into the present, and influences the way that the future will be shaped. But also take the time to envision a world that’s beyond what we already know.

A world without conflict.

Storytelling is a call for action for humanity. So if we can harness the stories that we tell—the ones we consider most important, and the ones we feel most compelled to share—and take the time to really listen to other stories, we can leave an important legacy.

In every footstep, kiss the ground.

In every footprint, leave a lotus.