This week I’m at a conference in Colorado where I’m delivering a keynote for folks who work as advocates in special education (so people like parents, teachers, lawyers, and providers). My talk is about storytelling—especially listening to stories—as a way to prevent conflicts, bridge divides, and solve disputes. It’s always interesting being a speaker at events like this because there aren’t that many opportunities in modern life where you have a captive audience. (Being at a conference is actually similar to the Festival in that way!) It’s rare to be in a public space where people feel obligated to pay attention and listen carefully. 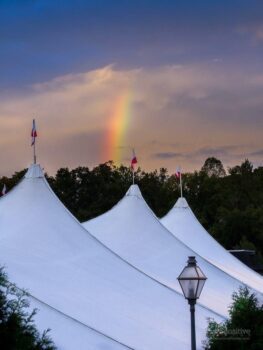 Whatever side of the political divide you may fall on, I think we can all agree that a lot of the environments in our modern lives are not conducive to good listening. If anything, they’re hostile to it. I also think it’s fair to say that this problem is seeping into our home lives, because it’s hard to escape the discourse and its distractions. (Have you ever tried to watch a movie on Netflix without checking your phone? It ain’t easy.) On top of that, with the pandemic blurring the boundaries between work and home for so many of us, there’s the general sense that we should be doing everything, everywhere, all the time. That constant pull on our attention makes it even harder to focus.

In this context, I’ve been thinking about our upcoming Virtual Festival. (It starts tomorrow—Friday, October 28! Please tune in. All the programming will remain available through Thanksgiving.) Almost all of it was recorded in Jonesborough earlier this month, when thousands of us gathered for the National Storytelling Festival. I always talk about how there’s magic in Jonesborough when we gather there together—and the magic was certainly there this year. It was great. But I also know that there’s a different kind of magic in meeting people where they are, and I’m so glad we have the technical capabilities to reach people who couldn’t be with us in person. There’s a different kind of listening that can take place when you’re watching a teller in the intimacy of your living room instead of sitting in a crowd at a large festival. Different contexts can open up the same stories in interesting and unexpected ways.

It’s another blurring of a boundary, to be able to import our Festival into your home. It bridges the divide between public and private life, and public and private conversations. I think in this case that blurring of boundaries is positive and productive. (Part of the magic of our Festival is that you won’t feel tempted to look at your phone so often!) So while you listen to these stories, I invite you to consider the productive opportunities we have to listen attentively, and also “listen outside the lines.”

As a professional in the arts, I often think about the imposed divisions and silos that shape our work. As a society, and as audiences, we often separate the visual arts from the performing arts and so on until every way of working has its own little category or bin. But what has been interesting from my work in storytelling (and my previous work in museum administration, education, and working with people with profound disabilities) is that some of our greatest success stories result from the times that we have found ways to resist that urge to categorize.

Years ago, at a literary festival, I met an attorney who had been one of Dr. Martin Luther King Jr.’s speechwriters. He told me about how he was classically trained in playing the clarinet, and that he’d often used musical theory in his work drafting the speeches. He described imagining Dr. King as the instrument, and then considering the composition and the cadence of different words as he worked and wrote. I loved this detail because it’s a reminder of how we are all so closely interconnected. There’s music in the spoken word, and the two can’t fully be separated. They work together to produce meaning.

Applying this idea to the concept and art of storytelling: when you’re paying attention, you’ll begin to hear stories in all sorts of places. Stories aren’t just told from a stage; they’re also the currency of daily life.

I think about all the different contexts I worked in before I came to the International Storytelling Center. One of the best jobs I ever had was when I was 20 years old. I worked as a live-in bar man in an East End pub in London. From early in the morning until late at night, I’d serve drinks. But I was also meeting many different kinds of people. There was the veteran who would come in and drink three pints of Fosters, then ask for a gold watch-a scotch in Cockney rhyming slang. And an old Pakistani man who conducted business in the pub, and drink three double gins around lunchtime. There were so many characters who came into that bar: students, old timers, even old East London gangsters. All of them treated me with love and kindness, and often on quieter days they’d quietly open up and share stories from their lives.

If we remain open and receptive to stories wherever we encounter them, we can learn something, sure. But we will also have stronger relationships and more textured lives.

I’m reminded of a time some years ago when a small group of Japanese storytellers came to Jonesborough for the National Storytelling Festival. They shared some stories at our “Swappin’ Ground,” a designated space at the event where anyone can sign up to tell a 10-minute story. The Swapping’ Grounds is run by volunteers of our local Storytelling Guild. The Japanese tellers initially told their stories in English. Following a hunch, the guild members asked them if they would tell the stories again in Japanese.

The Japanese visitors were perplexed because they thought the audience wouldn’t be able to understand. But what the guild members correctly intuited is that there’s more than one way to listen for meaning, and that performing the stories in their native tongue would unlock a different level.

As I’ve mentioned before, the late Kathryn Tucker Windham, one of our late matriarchs in storytelling, was fond of saying that storytelling teaches us how to listen. It’s important to remember that there’s more than one way to do that, and the methods aren’t always straightforward. We can develop new capacities in ourselves to process unfamiliar information. We can open up channels of communication that are hard to categorize, but provide rich and meaningful opportunities to expand our horizons and improve the world.