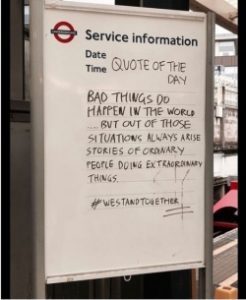 Not so long ago, I logged onto Facebook and saw my cousin had “marked himself safe.” Safe from what? I thought, but quickly I learned that there had been a terrorist attack. My heart sank, but I was glad that the immediacy of technology let me know that my cousin, who works inside the Parliament building in London, was okay. I also checked the status of an old friend who works for the government—he, too, was in the vicinity, and thankfully safe. It was a strange feeling, watching this unfold in real time, but from a distance.

Terrible events like these are in the news more and more often recently, but to some degree it’s always been a part of life, even growing up in England. When I was a kid, an IRA bomb exploded in a hotel just opposite the street where my dad worked. Before that, less than a mile from our house, a town official got up one morning, said goodbye to his wife and kids, and was killed by an IRA car bomb. That day, I overheard my dad, a smart-dressed Sikh man who wears a turban, tell my mom that someone, a stranger, had called him a terrorist. That was the first time I really took notice of the word, despite the fact we heard it almost every day on the news in Britain. At the time, there was conflict in the UK and beyond, from IRA bombings in cities across Britain, fighting in Northern Ireland and in the Middle East between Israel and Palestine, and the anti-apartheid struggles that were taking place in a far-away land called South Africa.

It was sometimes difficult growing up different in a small town, but my mother helped fend off some of my schoolmates’ racism with her homemade Indian curries. (Everyone loved them—it was one of the things that helped me feel proud of my difference instead of ashamed of it.) When I was six years old, my mother took me to India for the first time, and we visited my great-grandmother’s village. She had about a century on me—she was 108. The first time I saw her she was nearly bent in half, warming kernels of corn over a fire with her small, worn-out hands. She gave me some of the kernels to eat and continued cooking, cutting up fresh spinach and telling me stories about India’s struggles for independence, which she and her siblings were all very much involved in. She only spoke basic English and I spoke minimal Punjabi, but I sat there listening, watching her expressions, and taking a certain comfort in hearing these stories about my heritage. I think that’s when I first understood the power of stories to make you feel safe.

It’s difficult to be away from home when bad things happen. Watching my cousin’s post during the London attack, I thought back to September 11. In 2001, I was living in Edinburgh, and an American backpacker just happened to be staying with us. We turned on the TV and together, stunned, watched the Twin Towers collapse. Staring down in horror at my phone in Jonesborough, I suddenly understood how my American friend must have felt in that moment back in Scotland. 2001 was a turning point for me—the event that put me onto the path of using the arts to promote social change. That was when I started seeing myself as a citizen of, not just one country, but of the world. Six months later I established a festival in Edinburgh in response to the rising tensions, inviting people of many different faiths and cultural backgrounds to come and share their stories. Six thousand people came together to celebrate diversity that day. And although it was terrible that it had to come out of such a tragic event, many new friendships were formed—and I think our community became a safer place for everyone.

I’ve been in the U.S. now for more than five years (now as a permanent resident), and I see storytelling working in the same ways here. I remember the first time I met Ray Hicks’ children at their family homestead in the mountains. It reminded me of my grandparents’ village in India. The paintings on the walls may have looked a little different, but just being there in the presence of people that understood and valued stories in such a way was a familiar feeling. Every day, all around us, stories of inspiring people are unfolding about peacebuilders in all different shapes, colors, and forms. One of our jobs at the International Storytelling Center is to facilitate the ways in which they are shared.

All the time I’m exposed to these stories, not just in my work, but scrolling through Twitter, Instagram and Facebook. On the Thursday after the terror attack in London I checked my feed and saw something that made me smile. Someone had posted photos of messages that passengers left for their fellow travelers on the London Underground—positive thoughts to help people get through the day after the crisis. The one that really stood out to me said: Bad things do happen in the world…but out of those situations always arise stories of ordinary people doing extraordinary things. These are the stories we must share with ourselves and our children, as parents and grandparents, uncles and aunties, teachers and neighbors and friends. We have the power to change the world, one story at a time.