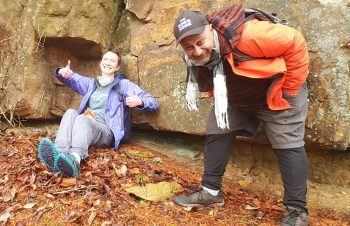 When I was younger, I went to big New Year’s Eve parties every year. But I was never really a big NYE person (not sure why). What I prefer is taking morning hikes on New Year’s Day, when most of the world is still asleep.

One of my all-time favorite hikes was in New York City, in 2013. I had gone out downtown the night before, but still managed to turn in early. (Too many people! Too much noise!) After a good night’s sleep, I hiked the entire lower side of Manhattan—or at least that’s what it felt like. The streets were quiet, still, and messy, like the aftermath of a big house party. I documented the city with my camera, including the half-empty beer bottle still sitting on a fire hydrant and the confetti that lined the steps down to the subway.

I walked the entire length of the High Line, the elevated linear park. It’s a greenway that was built from an old railway that stretches from the west side of the Meatpacking District, through Chelsea, to the northern edge of the West Side Yard on 34th Street. Officially, it’s a city park, so it’s full of art, murals, and beautiful Manhattan views. I walked alone, sat in a café, wrote a few poems, and then discovered a 24-hour poetry recital. I met a bunch of new people there and we all went out for Italian food. I remember that the music of one of my favorite Australian bands was playing in the background.

The first day of 2020 was very different. It was still a few months before the COVID crisis would emerge in the U.S. I woke up on an airport bench, hearing someone over the public address system announce the new year. I was flying from Boston to London to see my family. I was one of just three people in that cold and clinical airport lounge—a strange start to what would turn into a strange year.

This year, when it officially became 2021 at midnight, I was already in bed. I’d recently purchased new flannel sheets and I couldn’t stop thinking about how cozy my bed would be. I woke up early on January 1st, feeling refreshed. I jumped up, got ready, had a quick bowl of cereal, and made myself a cup of coffee to go. My buddy George and I had planned to make our way to the trail along a mountain called Chimney Top Mountain, about a half hour’s drive.

I was a little worried about keeping up with the group. I used to hike a lot when I lived in Scotland, but I think I’ve put on a few pounds during the pandemic. I was feeling out of practice. When we got to the spot, we met three other people who go to George’s church. I had met two of them previously, but Lily, a Syracuse University student who was back home visiting her parents for the holidays, was a new face. I connected with her immediately because I was supposed to visit Syracuse earlier in the year to give a talk at the university. Of course, it was postponed due to COVID.

The day was chilly, but refreshing. A wee bit misty. Perfect weather for a hike, I thought. And the hills reminded me of the lowlands in Scotland. We started out, and I realized pretty quickly that the path was steep. I was feeling out of breath almost right away. The group was happy to slow down to meet my pace. But about halfway up I told them all to go on ahead. I wasn’t enjoying making everyone wait. I’ve always liked spending time alone (in forests or cities—wherever!), so I told them I’d stay behind to rest, meditate, or perhaps return to the truck.

The truth was, I felt like a little bit of a burden, and a little down on myself for not being as fit as I used to be.

Lily decided to stay behind as well. As we rested, Lily told me about joining a group of student protests at Syracuse. I had heard about the protests on NPR, but I hadn’t met anyone that had been directly involved. It was interesting to hear what happened from a different perspective.

Having stopped to swap a few stories, I was feeling a bit more energized. The conversation continued as we hiked a little farther. We talked about our lives, and where we come from. How we see the world. We talked about social constructs, work, and climate change issues. I told Lily about my travels.

As we slowed down, we started to notice mushrooms that were growing around the bases of the trees. I recognized a few as turkey tail and chanterelle mushrooms. We found a dead tree, where the bark easily pulled away. Lily told me that it was the layer of tree that would take the nutrients and water from the earth, like a channel. The conversation turned silly as I told Lily about how, as a kid, I always wanted to be an Ewok from Star Wars. For long years I dreamed of living in a forest, making campfires with my friends, and cooking big community meals. And, later, working on strategies to fight fascism.

As we climbed further up the mountain, our stories became more imaginative. We expanded my Ewok story into a whole universe of fan fiction. There were Ewoks making peace with other tribes. Ewok songs and Ewok poetry. And of course, Ewok meals. At one point I fell over and hurt myself a bit. But I was laughing so much that I didn’t even feel the pain.

The slower, less strenuous climb made the hike so much more enjoyable. I no longer felt like I was dragging down the group, and we had time to truly observe all the surrounding nature. As we got higher up, we could see between the thin trees to a place where there had been a wildfire. Eventually, we reached the top (long after the others, who had since gone ahead) to discover rocks covered in thick green moss. They looked like ancient temples. When we caught up to our friends, Lily brought out a mini stove and made us all a cup of hot tea. Thankfully someone had also brought some chocolate. It was a perfect adventure for New Year’s Day.

Coming back down the mountain, rain started to pour.  Lily decided we should try to slide down instead of walk, which was a lot of fun. I realized what a great way to start the year the hike had been, despite my initial reservations. And I enjoyed meeting my new young friend.

During the car ride home, I realized I had a New Year’s resolution. Earlier in the day, I’d told George that I hadn’t made any.

Lily helped me see that I still possess the spirit of adventure and imagination, and reminded me how important it is to slow down and appreciate what’s around us. As we get older, perhaps we get more stifled and skeptical. And on top of that, 2020 disillusioned many of us. 2021 has had a bumpy start, but there’s something magical about staying open to new possibilities.

I read an article about how hard it is to keep resolutions. Whether or not that’s true, what the article suggested resonated with me: that forgiveness and gratitude are so important. My New Year’s resolution is to be more grateful for the experiences I have, and to slow down and appreciate the present more. It doesn’t matter how long it takes you to get to your destination. The journey and the friends we make along the way are what’s important.