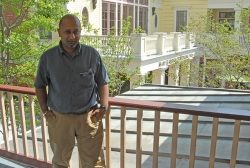 International Storytelling Festival President Kiran Singh Sirah thinks the path to world peace may come by way of one of the world’s oldest traditions.

Having traveled the globe for years, specifically touting the power of storytelling through the arts, Sirah has no difficulty making connections where ever he goes. In his most recent trip to South Florida and then to São Paulo, Brazil, for the Rotary Peace Symposium on June 4, Sirah made one of those connections.

After appreciating the stories told by the symposium’s keynote speaker — Dr. Oscar Arias, who was twice named president of Costa Rica and is a Nobel Peace Prize winner — Sirah popped out his iPhone for a quick interview. On a bustling recording, Sirah plays back the interaction, in which Arias realizes “Johnson City” is written on his interviewer’s name tag.

“Let me tell you a more interesting story, I went to school in Johnson City at East Tennessee State University,” Arias told him.

Arias did, and Sirah agrees wholeheartedly with one of Arias’ many quotable lines: “Peace is a process also known as art.“

In his travels, among many other successes, Sirah has taught captains at Fort Benning, Georgia, how to incorporate storytelling in their training to both teach and learn from the natives they encounter in Iraq and Afghanistan. He is currently working with African-American social reformer Frederick Douglass’ great granddaughter to collect the stories of everyone in volatile Baltimore — from police officers to the young and old.

As president of the International Storytelling Festival, where the mission is to enrich the lives of people around the world through storytelling, Sirah wants to hear from everyone. Through individuals learning about other cultures and hearing their stories a common understanding can present itself and better world will follow. Sirah prides himself in continuing the tradition brought forth by the center’s founder.

”When Jimmy Neil Smith founded the International Storytelling Festival, he was doing something about a vision to bring people together through non-violence, through community-building, through building relationships, connecting people to people and enabling people not just to hear stories, but to tell stories,“ Sirah said. ”When we do that, what we’re doing is building the foundations for peace and a better world.“

He also believes the trading of stories isn’t just effective on the one-on-one basis and tackles his mission with a ”the-more-the-merrier“ approach. When thousands of people pour into downtown Jonesborough in October for the annual National Storytelling Festival, each and every attendee will be a part of their own story, as well as experiencing the tales of others, bringing forth even more stories.

This year’s festival, the 43rd of its kind, will feature workshops and guidance in an effort to help those in attendance develop and tell their own stories. In festivals, especially those highlighting the arts, Sirah sees the greatest opportunity to bring together people of diverse backgrounds.

”That’s how wisdom and learning was passed on through the generations,“ Sirah said.

In the early stages of storytelling, it was the only way to pass along information before humankind developed the ability to write down and log information. Sirah and the International Storytelling Center have taken today’s emerging technology to help make sure people worldwide have a chance to hear these stories. This would allow people from every country on the planet to self-direct their learning and unpack these stories.

Having formed a digital partnership with Google’s Cultural Institute, a free online exhibition that explores the stories behind history’s most important historic and cultural moments, delivers Jonesborough’s storytelling festival to the international stage, at no cost.

”You bring people together and you empower them to tell their stories and when we start doing that it inspires people to see the world in a different way.”

If that gets the ball rolling, Sirah sees a better world ahead.

Upcoming events before October’s National Storytelling Festival include a Storytelling and Palliative Care workshop on July 23 at 11 a.m., where the goal, according to the center’s website, is to use stories as a way to construct a powerful narrative medicine that brings connections, care and comfort to palliative care patients and their respective caregivers.

For more information, go to www.storytellingcenter.net.