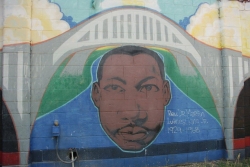 This summer, in honor of my birthday, I decided to take a good old-fashioned American road trip to Baton Rouge, Louisiana. My neighbor was moving there for a one-year public health fellowship, so after three years in Tennessee (and two in North Carolina), it seemed like a good opportunity to get to know more of the American South. We made some great stops along the way, including a crab festival in Bay St. Louis, Mississippi for the Fourth of July, barbeque in Alabama, and a tiny national park inside the French Quarter in New Orleans. But what really stood out to me about the trip was the time I spent in Selma, Alabama.

The world knows Selma, of course, because of the Selma to Montgomery marches, where Martin Luther King led thousands of demonstrators through Alabama at the peak of the Civil Rights movement. I visited the church where Dr. King spoke at the beginning of the march and walked over the Edmund Pettus Bridge, where nonviolent activists were beaten in the Bloody Sunday attack. I visited a memorial for Bloody Sunday, as well as murals featuring other heroes of the Civil Rights movement, and thought about similar sites I’ve visited in Northern Ireland, where I used to work, and Punjab, India, where members of my family where killed during India’s independence struggle.

In storytelling we also know Selma as the home of Kathryn Tucker Windham, who died in 2011. I stopped at her former home to spend some time with Charlie Lucas, Kathryn’s dear friend and neighbor, and learned more about her life. (She died a few years before I came to ISC, so I never knew her personally.)

Charlie told me about how Kathryn, who had her first newspaper job at just 12 years old, was a journalist. As a reporter, she was in the thick of things during the Selma to Montgomery marches, telling a very different kind of story that we came to know her for in the world of storytelling.

In a way, her role didn’t change much from the time she was a reporter to when she took the stage as a performer. She was always observing the world around her, collecting stories, and sharing them to bring people together. She performed at the National Storytelling Festival many, many times and even began her own storytelling festival in Selma, which continues in her name to this day.

The way Charlie spoke, I could see that they were more than neighbors or even friends—they were family. He talked about how they played basketball with local teenagers and how, when Kathryn was asked to pitch the first baseball at a local game, he made tin buckets so she could practice her throw. They practiced together in their adjoined front yard.

I know he misses her, as we do miss her in Jonesborough, especially at the National Storytelling Festival.

I was in Baton Rouge by the time that Alton Sterling, a man who was peacefully selling CDs outside a convenience store, was killed. There, I spoke to a young woman who stood by herself with a sign that read We Are All Alton Sterling.

On my way home I thought a lot about how far we’ve come since Dr. King’s marches in 1965, how far we still have to go, and the role that storytelling has to play in building empathy, understanding, and peace.