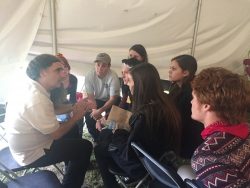 Everyone who attends the National Storytelling Festival is bound by one purpose, and that’s to listen to stories well told. The festivities are held over a long weekend, so a lot of our guests are here on their own time to unwind and enjoy themselves.  But we also have people who come with other agendas. That’s one reason why we believe in the power of storytelling not just to entertain, but also to aid in people’s professional and educational growth.

I was reminded of this one morning during the weekend of the Festival. Walking along Main Street, I came upon a group of people using one of our Story Spots (small stages scattered across the Festival grounds where people could tell impromptu stories). I stopped to chat and learned they were from the Tuscarawas County, Ohio Convention & Visitors Bureau. As part of their effort to help local attractions harness the power of storytelling, the team came to Jonesborough to gather inspiration, sharpen their skill sets, and get a little firsthand practice. The group kindly agreed to let me share this video of a member of their group, Chris Hart, telling a short story that he had entered into our Story Slam.

The photo at the top of this post shows another special delegation, a group of high school students who came with their AP English teacher from Boca Raton High School in Florida. About half of their group were slam poets who compete with their school team at the national level. In the photo they’re talking with Don White, one of our featured tellers, who met with the students to offer a little advice about performing after one of his own sets under our big-top tents.

All in all, more than 1,000 high school and college students and teachers came to this year’s festival. Many of them took advantage of our ticket subsidy program, which is sponsored by the Tennessee Arts Commission. We also featured the performance of one special college student, Maeva Ordaz, the national champion of Poetry Out Loud. In case you missed it, we featured her on the blog last month.

We had special guests from near and far. Some were ETSU students receiving credit for their participation. We also hosted a delegation from South Africa working to create their own national storytelling festival. We’re happy to mentor these folks, not just to watch the storytelling movement spread and grow, but because it strengthens the international ties and cross-cultural dialogue that are so vital to all that we do.

Storytellers like the late Kathryn Tucker Windham and Syd Lieberman (who passed away earlier this year) were passionate advocates of the power of storytelling to connect us all as one human family—a binding force that helps us learn and share amongst ourselves, and pass those insights to the next generations. We hope that each and every person in our audience went home with that mission in their hearts, inspired to share all sorts of stories—big ones, small ones, and all the others in between—with the people in their lives.