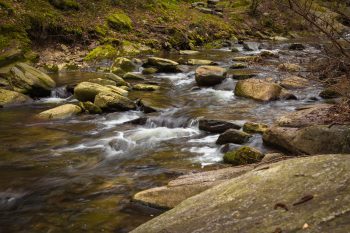 I keep thinking about the idea that we’re all just blips in the history of the universe. I pondered it recently, sitting by the bed of a river near my house, watching the flow of the stream that will eventually deposit into the Tennessee River, on to the Ohio River, and ultimately down to the Mississippi. In the beginning it’s just a trickle of water. Then the water flows and joins a bigger body on and on, combining channels with a larger network. Each one of us is like the little trickles. We have our own stories that come together and combine into a bigger river, creating a narrative of who we are, individually and as a culture.

Watching the water, I thought about Siddhartha, one of my favorite books. It’s about a young man who goes on a long journey. On his quest for happiness, he meets a merchant and has a relationship with a woman. Then along the journey he meets a fisherman whose job it is to run a ferry that takes people across the river. One night the river current is too swift to cross safely, so the young man sits and talks to the ferryman. The ferryman tells him that all the things he needs to know about life, he can learn by watching the river. The man looks into the river and he sees ripples. The ferryman tells him that the ripples are teachers. Each individual ripple that comes to the surface lasts for just a moment before it vanishes back into the flow. Every life form follows a similar pattern, moment to moment. We’re all part of a continual flow.

Gwenda Ledbetter, a 90-year-old storyteller, has a philosophy that I like about continually paying attention. Every day, she writes a story or a poem and emails it to her entire network. She tells us what’s happening with the Canadian geese that she observes through her condo window (just over the mountain in Asheville). She discusses the change of colors in the leaves in the trees, and the relationships between the animals. She shares reflections. Sometimes she relates the subject to bigger issues like climate change. Sometimes she relates it to something specific like the COVID-19 crisis itself.

I thought about Gwenda’s emails as I walked alongside the river in the woods near my house. The moss reminds me of the kind I’d see on rocks back in Scotland when I would go for walks. When you see moss attached to rocks or trees, you know the air is good because it can create a surface where moss can grow. I think of a walk I took a couple of years ago in the forest near here, a two-day hike along the Appalachian Trail.  It rained the whole time. Some carried food, while others carried the large tarp for the group’s campfire. It took the entire team working together to make our way. Doug Elliott, a storyteller, joined us for part of the hike. He told us stories about the lore of the forest, and foragers, and stories about the animals and life in Appalachia. At one point, we passed a spot that had been devastated by a forest wildfire. The sides of the trees were blackened. The open space looked like a barren valley, scarred and worn through. But Doug encouraged us to look closer and see even in this very spot, there was life emerging. Nature was renewing itself.

In Appalachia, we have a tree called the Table Mountain pine. It’s a type of “fire pine,” one of several species that rely in part on fires or the aftermath of fires to propagate. The pine cones are almost glued shut with resin, even after the seeds inside mature. The intense heat of a forest fire can melt the resin, which releases seeds that are then distributed by thermal winds. Other pine species have tough coatings that can lay dormant for years waiting for fire to release their seeds, either through fire itself or a chemical reaction in the soil.

In nature and in life, the destruction of one thing can mean the growth of another. It’s all ultimately part of the same story if we take the time to observe. Sometimes our moments of greatest struggle can be the memories we cherish most. Like my friend Gwenda Ledbetter and the ferryman in Siddhartha, I’ve been trying to pay attention.

ISC is building a better world through the power of storytelling.