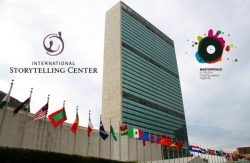 Earlier this year, International Storytelling Center and MasterPeace a grass-roots peace movement based in the Netherlands and Cairo joined forces with the United Nations in a joint global initiative to promote storytelling for peace worldwide.

Around 500 participates entered stories for peace that had the potential to be turned into a live performance storytelling experience. The winning entry came from Velma Mukoro from Nairobi, Kenya. ISC executive director Kiran Singh Sirah and Velma Mukoro have worked together to transform the written story to a performance storytelling telling piece that Velma will present at the United Nations headquarters on September 19, 2014, for the International Day of Peace. An event hosted by UN Secretary General Ban Ki-Moon, where around 500 students and dignitaries will attend. International Day of Peace now has around 500 million people participating through peace and arts events across the world. ISC is honored to be a partner in this global project with our friends at MasterPeace and the United Nations to help grow the arts of storytelling and promote opportunities for people to share their stories.  You can read Velma’s story “Little Pitchers” below:

Someone once said you must go through storm to appreciate sunshine.

Listening to Nyankir recount her haunting moment of terror during Southern Sudan’s war, I couldn’t help being appreciative of the lasting peace and stability we had in Kenya. She was very grateful having the rare second chance to start over, as not many of her countrymen had made it across the border. My country was her safe haven. Maybe I wasn’t grateful enough, and was I just sorry for the unbearable capacity of cruelty she had been exposed to. It was humbling watching her stay, as Nyankir marveled at our inter-tribal harmony and peaceful co-existence. To me, these were just words pieced together in our national anthem after gaining independence from colonial rule.  It was nothing to write home about. I didn’t share in her excitement.

Then came the fateful day when the disputed presidential elections of 2007 stirred up well concealed hatred, turning men into beasts of vengeance who littered streets with innocent blood. There were gunshots and cries, fire and burns. It wasn’t amusing running from an understocked food store to an out of stock pharmacy with hands lifted high as a sign of surrender. Extensive international calls for calm and dialogue cooled thing off leaving behind a dwindling economy and shattered trust.

For the first time, I knew why Nyankir had been thrilled to arrive to Kenya. It upset me that it had taken a war to make me understand the urgency of preaching peace even where it prevailed. The media, backed by the government and humanitarian organizations took to peace campaigns. Seven years later, the effects of the conflict are still evident, the scars still raw.

Amidst the blame game and uncontrolled hate across social platforms, I noticed them. Little pitchers, a generation of boys and girls that had been left out in the recent nationwide reconciliation programs. Harmless they are, until you hear them speak with venom trickled down to them from days spent eavesdropping on adults’ spiteful talk. So young, so faultless yet so corrupted. It was sad watching children, being caught up in all the hate and ethnic profiling. No child should be raised that way. I was concerned.

I remembered Nyankir and how the thought of peace had elated her. It had taken the shoe pinch to make me share in her excitement. What were ‘mere’ words of our national anthem now bring tears to my eyes. I know what we had and what we are missing. These children I saw in the street, don’t. In my own simple way, I will try to make them see that though they’ve had a rough start, it doesn’t have to be this way. Martin Luther King Jr. said, “Hate cannot drive out hate, only love can do that.”

I went through the storm to appreciate the sunshine.

View the event live on September 19th between 9:30am and 12:15 (EST). The UN Secretary General Ban Ki-Moon will be in attendance, and Velma Mukoro will be presenting her story as part of this event.