This year was my seventh Festival since joining ISC as president, and it was an especially lovely one because I allowed myself to relax and be fully present. I resisted the urge to be in ALL the places at once and sat back in full confidence that all was well. I treated myself to ghost stories both nights—put on my cap, grabbed a hot chocolate (extra whipped cream), and found a nice place to sit under a tree. I also made a special effort to hear some of the tellers’ whose work I don’t hear often (especially folk tales). Here from the UK, Mara Menzies told both Kenyan and Scottish stories. She lives in Edinburgh, where I lived when I first moved to Scotland years ago, and the first story I heard her tell was set there—nice and familiar. Then she moved into traditional stories from East Africa, which were familiar in a different way. One of her ideas that resonated with me was about the sacredness of light and humor. The world often feels very serious, especially lately, so it was a good reminder that the simple act of laughing can help us feel more connected, more playful, more childlike—and more connected to the imagination. Laughter itself can be very healing. 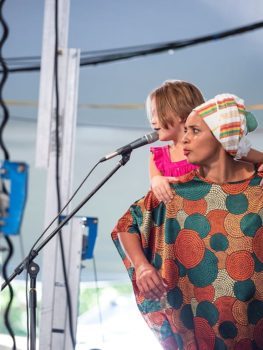 I heard another set of folk tales from Donna Washington, who mixes family stories with traditional stories about tricksters like Anansi and Brer Rabbit. Each tale was a deft mix of the story itself, the origins of the story, and reflections on her parents. These were stories with very serious undertones and layers, including the real experiences of discrimination against her family. But throughout her performance there was room for laughter as well. Just masterful.

This year was my first turn as an emcee, for a special session of “Freedom Stories” with Sheila Arnold. It was thrilling as the kickoff of a two-year program in which ISC will explore African-American heritage in Appalachia, funded by a generous grant from the National Endowment for the Humanities. Sheila is one of many tellers who we’ll be working with on the project—and we plan to record every session for a podcast that will make the material available to people across the nation and around the world. (Access is important since so many of these stories have gone underappreciated and untold for so long.) Sheila’s session was a heartfelt exploration of the Underground Railroad and the history of Jonesborough (good and bad), especially the abolitionist Elihu Embree, a very complicated figure. Sheila’s stories helped us understand what the journey to freedom felt like for people as individuals—their pain and struggles. It was a very powerful session for me, and for everyone there, I think. 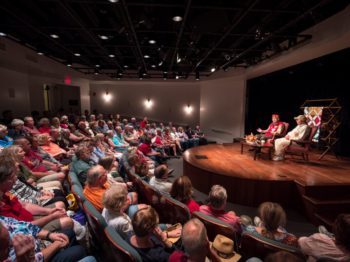 I was pleased to catch our special event with Peter MacDonald, who served as a Navajo Code Talker in World War II. He’s 92 years old. I only attended half the session because of other duties, but it was incredible to hear. Mr. MacDonald isn’t a professional performer, but he’s an exuberant storyteller when he starts talking about what he’s known and lived. His session reminded me a bit of a phenomenon that’s familiar to me from my folklore research in graduate school: When you ask someone questions about places and memories that are important to them—the moments that shaped their lives—incredible stories begin to surface.

A theme I noticed emerging over the course of the weekend was immigrant stories, especially older stories gazing back on U.S. history. An obvious example is Dan Hoyle’s “Border People,” stories he collected from immigrants and people living on borders, between spaces. But I also heard stories about people who came through Ellis Island with hope in their hearts, as well as those who were brought here unwillingly, in terror, through slavery. As a recent immigrant myself, I enjoyed hearing Antonio Rocha, who’s originally from Brazil, reflecting on his last three decades in the United States.

Earlier this year, during her workshop for our Teller-in-Residence series, Beth Horner spoke of folk tales as the personal narrative of an entire culture. It’s such a striking way to think of the form. Traditional stories are part of us but also something bigger than all of us. Each of us, whether or not we think of ourselves as storytellers, are custodians of these tales, even as listeners. And at ISC we’re custodians of the art form of storytelling itself. One reason that the Festival is so important is because of what happens when we come together to really listen is that we share a glimpse of all our different homes and traditions and beliefs—everything that has been sacred and meaningful in our lives. 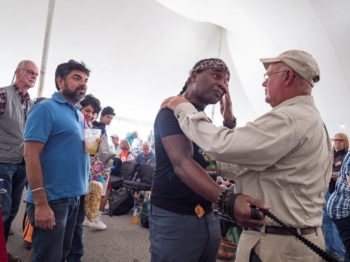 The sheer number of people I get to meet at the Festival is a beautiful thing. I enjoyed talking to Gregory Pickett, our Story Slam winner, who was here from Chicago. I met a Cuban couple who told me that of all the places they have traveled in their RV, Jonesborough is the most friendly and welcoming. I spoke with lots of folks who are thinking about moving to Jonesborough or the surrounding region (please come!), as well as folks who have lived here for their entire lives. I caught up with volunteers, including faces I see every year, people who were back after a hiatus, and some new folks who were here for the first time. It’s always a pleasure to witness so many different kinds of folks gather here in Jonesborough—to hear so many different languages, and to see regalia from so many world traditions.

Every year, on the last day of the Festival, Sunday, I always look forward to sacred storytelling, and this year was no different. It’s always my favorite hour of the weekend, maybe in part because I don’t have any more speeches to give. This year I heard a folk tale from Carolina Quiroga-Stultz, a Colombian teller; a story from the Reverend Robert Jones, who was here from Detroit; and Laura Simms, who shared a story about growing up Jewish in New York City. Donald Davis closed the set with a story about his brother.

When I drove home that evening, I noticed the colors of the leaves had started to change. It happens so quickly, just over the course of a few days. The temperature had finally dipped, a sign of the cool weather to come. I always consider the Festival to be the first days of Fall (my favorite season), even if the weather doesn’t comply. But this year it was spot on. The next week, it was cool enough to take a big homemade pot of chili (as well as some cookies made by a friend) into my tired team at ISC. I readied myself for the next week’s work, meeting with staff and tellers, talking over the event, and settling in to write my thank-you letters. 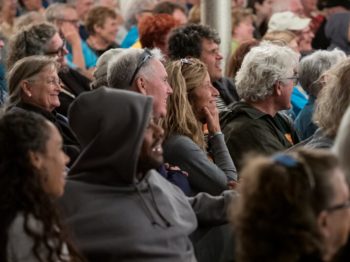 What I hope to take from this Festival into the year ahead is the centered sense of presence I felt all weekend. There’s a certain magic that comes from not checking your phone for a few days, and disengaging from the 24-hour news cycle enough to be here with one another. Taking time to truly listen, instead of just react, doesn’t have to be reserved for special occasions. It’s a mindset we can carry into everything we do, opening our hearts and minds to new ideas in the year to come.