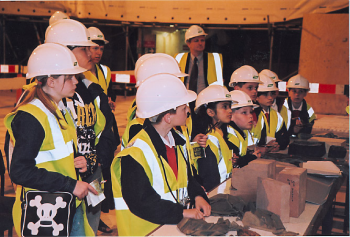 I’ve served many organizations in many capacities, but one thing that binds all those projects is that it has always been important to me to help young people capture and develop their stories. When I lived in Glasgow, Scotland, it was one of the cities with the highest clusters of child poverty in all of Europe—especially in the east end and south of the River Clyde, where I still own a home. When I worked with gang members as a volunteer, I developed a program in collaboration with social workers and Glasgow police officers in which we encouraged kids to think of their neighborhood as a sort of living museum. When kids feel more vested and included in their communities, they’re more likely to want to contribute in constructive ways.

I helped develop many innovative youth arts projects during my time in Glasgow, but one of my most memorable and rewarding experiences was forming a “junior board” for Kelvingrove Museum, one of Scotland’s most popular attractions. At the time I worked across all 14 of the city’s museum to design collaborative projects on different themes. Kelvingrove is about the size of an American football stadium, and it holds quite a wide variety of collections, ranging from fine art to natural history to ancient artifacts from around the world. Since it opened in 1888 as part of Queen Victoria’s Great Exhibition, Kelvingrove is where Glaswegians go to learn about the world. It was already known as a museum for the people, but it was part of my job to further strengthen the connection between the museum and the surrounding community. I’ll never forget the time when Kelvingrove closed for a multimillion-pound renovation. I was talking to one of the museum’s directors, when an older man walking down the street pointed and said, “Are you the man in charge of this redesign project?” When my companion said yes, the stranger said, “Don’t mess this up! This is our museum!”

Part of the joy of the redesign process was building our junior board, a group of kids between the ages of 9 and 12 who were recruited from local elementary schools. Our junior board functioned much like their adult board counterparts, attending design concept meetings and making important decisions. Each member had to go through an interview and application process to even participate! They truly had an important job.

I worked with this group of kids over the next three years to make sure their input was considered as we redesigned the museum. The kids loved wearing hardhats and vests to attend the construction site. It was important for them to be able to visualize the space so they could generate ideas about what it should become. Over time, the junior board met with curators to discuss exhibits, and with restaurant and café managers to discuss menus. They helped test interactive panels and provided other input throughout the redesign process. These kids were thrilled to help, but it was also real practical assistance for everyone on the museum team. Kids were, after all, some of Kelvingrove’s most important “customers.” When we started the project, we knew that one-third of all visitors to museums across the UK are young people.

As it turned out, the culmination of all the junior board’s hard work coincided with the launch of the new museum, which Queen Elizabeth and Prince Philip would officiate. (Her majesty’s grandmother, Queen Victoria, had launched the original museum some 120 years before.) This, as you can imagine, was a big deal—a really big deal—if not to me (I’ve never been a huge fan of the monarchy), then to the kids, who were incredibly excited.

The day finally arrived. We weren’t entirely sure that the kids would get to meet anyone from the royal family, but my job was to introduce them if the opportunity arose. As it happened, as the Queen toured the museums, Prince Philip (the most controversial member of the royal family, and also my favorite), would be the one to greet the children. It was all a bit anxiety inducing, as he was accompanied by television cameras and a security entourage. Prince Philip, who was of course used to this sort of thing, looked directly at me, held out his hand, and said (in his very posh, distinctive voice), “So who are you?” I replied, and he pointed a long finger towards the junior board. “And who are these children?” I stuttered a bit, struggling to make the statement I’d been practicing for the past two hours, before we went down the line so each child could be introduced.

Prince Philip shook their hands one by one, smiling and asking them what they wanted to be when they grew up. I escorted him down the line, and gave each junior board member a wee thumbs up after they passed muster. “Teacher.” “Doctor.” “Airplane pilot.” Their responses were all pretty typical. At the end of the line, Prince Philip gestured to me and said, “Well, good luck. If it doesn’t work out, you can always get a job in a museum, like this chap over here.”

I was a little taken aback—after all, I had just spent three years of my life trying to convince these kids that museums were cool—but it was time to move on to the main attraction: lunch with the Queen. Prince Philip had broken through the barrier of our stiffness, so we were ready to move on to someone more famous. Lunch would provide the perfect opportunity. It was to be in the grand hall, with all manner of city leaders, officials, and dignitaries. The big tables were decked out with pristine white tablecloths, colorful flowers, menus, and shining silverware. A live ensemble played classical music.

But to the junior board’s great disappointment (and mine!), the kids were relegated to the lunch room downstairs. To help make it up to them, I discreetly arranged it so they could be in line among the crowds outside, positioned as the first people who the Queen encountered. The plan worked, the kids were happy, and it all ended well.

I’ve been reflecting on my experience with those kids as ISC’s work with the junior board at Unicoi County Hospital has gotten underway. Working with young people in this way is truly helpful to administrators and executives, but it’s also refreshing—young people can be brutally honest! And I’m always impressed by how kids, even very young kids, truly have a grasp on some of the urgent issues that are affecting their communities and our shared world. I’m thrilled to see what this bright group of young people will contribute in their important role as junior board members at Unicoi County Hospital.