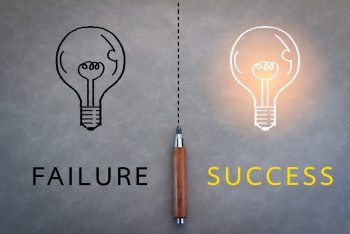 As arts organizations, it’s really important to celebrate our wins. Big awards and prestigious grants are achievements that deserve recognition and a press release or two. Understandably, folks are far more reluctant to talk about failure. There’s still a sense of taboo around admitting that every project, application, and proposal didn’t go exactly as planned—or worse, that an idea backfired.

It’s obviously quite natural to feel discouraged when an idea or an opportunity falls through. But when I reflect on some of ISC’s biggest “wins” in recent years, I remember that failure was often a necessary step on the way to success. What we view as rejection is often more accurately the chance to refine our ideas. ISC’s Europa videogame project (which received a prestigious prize from Purdue University) began its life as a (failed) grant proposal to a United Nations agency. Similarly, one of our most important current projects with a regional hospital began as an unsuccessful grant proposal. That experience sparked a more developed idea that we were able to act on and execute.

Reaching back even further, I can see this dynamic at work in my own life as a professional. After I received my first green card to the United States, at age 19, I had to return to the UK due to my mother’s sudden passing. In the moment, it felt like a professional setback on top of a family tragedy. But I got a second chance at the age of 35—and I feel like I’ve made the most of it. Similarly, my first proposal to the Rotary Peace Fellowship program was rejected. But that initial application opened a dialogue, and Rotary encouraged me to reapply with a much more refined proposal. They encouraged me to focus more on folklore and storytelling, which eventually led me to this job. “Failure” is often just a signal that we’re on the right track, and we have more work to do.

And failure can be a rich experience in itself. I think about some of the people I met when I was 19, after my mom died. We created some of my fondest memories, and they remain some of my closest friends to this day. I can see now that this difficult period of my life was a time of personal growth and intense interpersonal connections. I once read that, eventually, we look back on our most challenging times in life as some of our most cherished memories. For me that has certainly been the case.

As arts administrators, the perspective that failure is just part of a longer process that unfolds over the long term is deeply necessary. Often the challenges and obstacles we face feel very pressing, which makes it difficult to take the long view. (The pandemic is an extreme example!) As we navigate urgent issues and advocate for the causes we care about, it’s critical to acknowledge painful setbacks and other things that have gone wrong (as organizations, as individuals, and as communities). Being vulnerable with one another in this way can be difficult, but it’s just as important as celebrating the big wins. It helps us feel less alone in the face of failure. But maybe more than that, it reveals that wins and losses are both necessary components of a larger process.

Recently, I was invited to present at the Robert Wood Johnson Foundation, the largest philanthropic organization dedicated to US health care. ISC had applied for a special grant in the category of pioneering ideas. We made it to the third and final stage of consideration for an incredible opportunity—and unfortunately, we didn’t get it.

I can’t lie: losing out on this round of funding was a disappointment. But more importantly, I know it’s not a dead end. Emotionally, not getting a grant can feel like a setback. But taking a step back, it’s obvious that being considered in the final round is in fact a validation of ISC’s work.

That failed grant application was what led to my presentation; our work had sparked interest, and led to the invitation. Members of the foundation’s senior staff were in attendance to learn more about ISC’s mission and milestones. It was a chance to go deeper than the pages of an application, exploring methodologies and nearly 50 years of experience on the ground of cultural preservation, applied storytelling, and arts performances. It was also a chance to build on our new relationship with an institution that is doing incredibly important work. We would’ve never had that opportunity without our “failed” application.

With time, it’s easier to see our most difficult moments as an organization contain incredible potential and power. That’s certainly true of the last year, as ISC has navigated the challenges of COVID-19. We’ve had to think outside the box, become more agile and responsive, and change the way we think of outreach and audience. And we’ve been highly motivated to explore the health care applications of storytelling, which has a remarkable healing capability.

By all means, let’s acknowledge our wins. But let’s also be thankful for the setbacks we experience along the way. They almost always help us come back stronger.