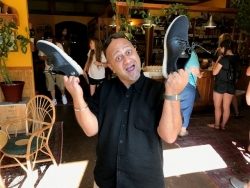 Yesterday, I met up with a friend at a tea house just over the mountain in Asheville. It was a funky Eastern-style place where you take your shoes off before taking a seat on a raised platform with cushions. The mellow dim light setting was soothing. We arrived in the morning and stayed through the early afternoon drinking delicious herbal tea, red Rooibos. After many long cups and about two or three hours of sweet conversation, we decided it was time to leave. My friend paid for us both. We said goodbye and went our separate ways. I spent the rest of afternoon walking around downtown. I listened to some buskers play bluegrass on their banjos. I window shopped. By then I felt a bit hungry, as I had only eaten a biscuit for breakfast that morning. I decided to go for pizza at one of my favorite places in a town nearby. Finally, I drove back home over the mountain. I was tired from my long day, so I went straight to bed and slept.

The next morning I got up early, boiled an egg for breakfast, showered, shaved and got dressed for work. Before leaving the house I slipped my shoes on as I do every morning, without bending down or touching the shoes with my hands. I only have two pairs to choose from. I’m not really a big shoes person. If I don’t have meetings planned, I prefer to wear the practical comfortable pair—the ones without laces to fuss with each time. But as I was just about to open the door to leave the house I noticed that something on the soles of my feet was not quite right. I looked down and realized in that moment that the shoes I was wearing were NOT mine!

How was I wearing someone else’s shoes? Was someone secretly living with me that I wasn’t aware of? I took them off to inspect them more closely. They were definitely not mine.

My mind flashed back to the day before, as my friend paid the bill at the tea house. As we were leaving, I must have mistakenly slipped on the wrong pair. It was coming back to me now. I remembered it being dimly lit. But still, how does one leave with the wrong pair? As a Sikh I’ve spent literally 40 years going to temple, where thousands of times in my life I’ve taken my shoes off to enter the holy space. (Since we all sit of the floor in that space, shoes are not allowed.) Over the years I’ve placed many pairs of my shoes alongside hundreds of others shoes of many shapes, colors, and sizes—from my kiddy size soft red Velcro Dunlops to swanky shiny hard grownup shoes.

Even at the Golden Temple in India, which I have visited three times since I was six years old, there are thousands of pilgrims’ shoes lined up next to one another. And never—never!—have I walked off wearing someone else’s shoes. Nor has anyone else walked off wearing mine. That includes the times I’ve worn flip flops. Somehow I’ve always been able to find my flip flops amongst a sea of other flip flops. Surely I should have noticed the difference when I put these shoes on? I’ve still got my marbles. (I think!) Well, in any case, I needed to get to work, so I put on my other pair of shoes—the ones where I need to bend down to tie laces.

In the afternoon, I decided to phone the tea house. I was a little embarrassed. A woman picked up and I explained the situation. The woman at the tea house told me they have my shoes. Yay! She also said she has the number of the owner of the shoes I had in my possession. As it happened I was passing back that way the following day, so the woman from the tea house scheduled a meeting time for me and this other person to swap shoes. I felt it could go really bad or it could go incredibly well. Maybe we’d be friends for life. How would this shoe swap go, anyway? Maybe like a sacred Japanese tea ceremony? Or like two proud samurai warriors returning from battle? Perhaps in the style of warring clans sharing a Scottish whiskey cup of friendship? We could tie our beards together in knots. Or maybe it would just be very uneventful. We’d meet, swap shoes, and live apart happily ever after, each wearing our own shoes once again.

As it turned out, the person missed the meeting and I left the shoes in the capable hands of the nice folks at the tea house. All that daydreaming for nothing! But I left with my shoes…and a pretty great story.