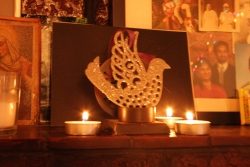 Last month, I traveled to Charleston, South Carolina to give a talk at the Charleston County Public Library (CCPL). My appearance was part of a series that had been organized by the folks there to engage the city following the June 18, 2015 shooting at Emanuel AME Church. The series honored Cynthia Graham Hurd (who was a long-time CCPL staff member) and the other eight victims who died that summer day, as well as the many other lives that have been touched by violence around the city of Charleston. There are so many.

After my talk, a woman approached me. She handed me an envelope that she asked me to open later. On the front, she had included a personal note about how my talk had brought up many different emotions for her. She’s still processing what had happened at Emanuel AME last summer; she thinks about it every day as she passes the church. In closing, she wrote, “May stories reach many hearts moving forward.”

I liked that: May stories reach many hearts moving forward. It reminds me of our mission here at ISC.

Later, back at my hotel, I opened the envelope. It contained a silver ornament in the shape of a dove, which is of course a symbol of peace. It also included another note. This one was a typed story.

In 2014, well before the holidays, Cynthia and I were talking about plans for Christmas. She was very happy because she had finally acquired a silver flocked Christmas tree, and she couldn’t wait to decorate it with all silver ornaments. I made a note on my November datebook page to buy Cynthia a silver bird ornament for her new tree. November arrived, and I read the note, but got caught up in the busyness of life and told myself, “I’ll just do it next year.

”This is that next year. I want to share with as many people as possible a silver ornament in memory of Cynthia Graham Hurd, so this and every year, we keep her close in our hearts along with the others taken from us at Mother Emanuel.

When I first arrived in Charleston, I received a special tour of all the gifts and artwork and other items that Emanuel AME has received from all over the world—an incredible sight. But what’s even more incredible than the love that the world has been pouring into that church (or into Charleston) is the love that community is reflecting back. It’s a generous act.

I only have the one ornament, of course—you can see it on my mantle in the photo, or on ISC’s Christmas tree next winter—but I wanted to share Pam’s story. I know it’s one that I’ll never forget. Please pass it on.

You can browse Kiran’s photos and learn more about his trip to Charleston on ISC’s Instagram page.