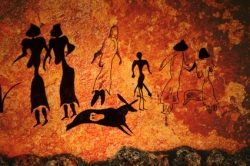 As president of the International Storytelling Center, I’m very much tapped into the power that stories have to change the world. Sometimes people are surprised when I tell them I’ve had that awareness almost since birth. From the time I could talk, I recognized how stories help us reshape and redefine our identities as we move from place to place.

In 1972, four years before I was born, my own family was forced, at gunpoint, to flee their homeland in Uganda. Around 50,000 Ugandan Asians fled the border and settled in new countries. My family went to Britain. They couldn’t take personal possessions with them—even mementos or objects of faith—but they could take their traditions and beliefs. Though I was born in the UK, these values were passed to me through the stories of my parents and others. They helped me form a sense of identity that was closely connected to a home that I could not then see.

Those connections were especially important when I felt disconnected from the community I could see—the one around me, in England. Sadly, I felt that way often. I grew up in a small southern English town, the first visibly Asian person born there. My father wore a bright turban and an African shirt, and my mother an even brighter sari. I wore my hair long. As a family, we stood out. There was often a lot of social unrest and racism that made me feel ostracized. But I always drew strength from the stories of family and friends. They gave me that sense of belonging to a place. Their stories became my vehicle for understanding not just local, but global, traditions and cross-cultural connections. I began to see that there was a world beyond the divisions and labels that society imposes upon us, and that when you allow yourself to see beyond borders, you truly become a citizen of the world.

My story is not unique. Many know firsthand the power of storytelling and its transformative potential to build community. From the time when humans picked up colored rocks to etch drawings onto cave walls to the day when NASA scientists inscribed a visual story onto a pioneer space probe before it was sent out into the universe, we’ve been using some form of story to connect with the unknown. The stories on our library shelves are incredible, but even more amazing are the stories each one of us carry with us every day. They provide a safe space in which to discuss differences, to unpack what it means to belong to a place, and even to cross a divide.

When I began my museum work, I became acutely aware of how stories can be used to break down walls of silence and other barriers to engagement. As an outsider—an Asian, English-born Sikh living in Scotland—I was able to use storytelling, and especially my own story, to form connections with community leaders, ex-paramilitary groups, territorial gang members, politicians, and police officers. I used storytelling in settings from Belfast, in northern Ireland, to the city of Glasgow to help build empathy and peace among groups that had experienced extreme violence. Those projects helped participants tap into memories, then use those stories to build a more inclusive model of what it means to be a part of a community.

In 2002, following the attacks on September 11th and local attacks on a mosque and synagogue in Edinburgh, I helped organize an event where people of faith and secular traditions stood side by side to tell their stories. We invited imams, priests, and rabbis—Catholics, Protestants, Muslims, Sikhs, Buddhists and Baha’is—to explore faith, belief, and identity in the 21st century. Coptic Christians sang songs of resurrection in Arabic. Sikhs wore the Scottish Sikh tartan and performed traditional bhangra with bagpipes. Jewish Scots performed music that combined the Scottish Celtic and Klezmer traditions. All together, 6,000 people of diverse faiths and backgrounds came together to stand shoulder to shoulder, using stories to express solidarity as one community.

Now of course I live and work in Jonesborough, the birthplace of the American storytelling renaissance, overseeing the work of the International Storytelling Center. One night in October 2013, during my first Festival, I heard master teller Elizabeth Ellis tell a story about a difficult and divisive time in this nation’s history: the Civil War. A group of Confederate mothers were laying flowered wreaths at the gravestones of their fallen sons. In a powerful act of empathy, they decided to also lay wreaths for the fallen Union soldiers. Though these dead were, in name, the enemy, these women recognized that they were also children of mothers who lived far away.

To me, that story was a powerful reminder that we can, despite differences, understand one another on a human level. This is a theme I find myself returning to often, not just in my work, but in life. Again and again, storytelling has helped me establish connections in my own communities—and as a visitor and a peacebuilder in the communities of others.

All of us have the opportunity to use our stories as a binding force whenever and wherever there is conflict, tension, fear or suspicion. Finding those common threads helps us to build civility and to treat others as we ourselves hope to be treated. From your lips to other people’s ears, storytelling is a truly democratic art, requiring no tools or props. We are, each of us, storytellers. To tell our stories is more than just a human right. It is a gift we can give the world.