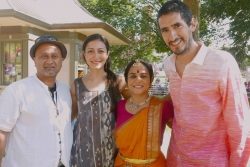 I had the pleasure of representing ISC as a participating partner in this year’s 50th Smithsonian Folklife Festival. Although ISC has served as a Smithsonian Affiliate since 1998, this was the first time we had formally participated in the event, which is held on the National Mall. The festival, which attracts around 1.5 million visitors each year, honors living cultural traditions and celebrates those who practice and sustain them.

The relationship between this festival and our own National Storytelling Festival goes back many years. Some of our most beloved storytellers, including Ray Hicks, have taken part in it over the years. It was an honor to see the ISC logo alongside institutions such as City Lore, the National Museum of American History, and the Smithsonian Latino Center.

I was picked up at the Reagan airport Thursday evening in one of the Smithsonian vans by a driver called Renee, who’s originally from Bolivia. It made me think about my own arrival to the U.S. just over five years ago. I came with only two suitcases, ready to study—but not really knowing what would be in store for me afterwards. It was a major transition. I had given away most of my personal possessions, including my car and paintings, to friends in Scotland. As soon as I landed in the U.S. I touched the ground with my hand and placed it to my heart. In my tradition, this is often how we honor new places and new beginnings. (It’s something I like to do on stage before I perform as well.) And now here I was getting picked up to perform and share my own immigration story on the National Mall. Who’d have thought me, a Brit, on the National Mall the same week this country celebrated its independence.

My performance was part of a storytelling concert that was produced in conjunction with City Lore, a New York City-based folklore project. It included four performances spanning the last weekend of the festival. Titled “What We Bring,” our program spoke to one of the festival’s major themes, On the Move, which explored how American culture has been shaped by the movements of people. I was one of three performers. We each introduced the traditions we represent, along with a symbolic object. Malini Srinivasan told a story about her parents’ arrival in the United States, and how a classical Bharatnatyam dance from India has been an integral part of her life. Her object was the ankle bells that had been gifted to her by her mother, who brought them from India. Hector Morales, who is originally from Peru, brought his Cajon drum and talked about how, when he first came to the U.S., he brought everything he owned in that drum. His desire was to learn jazz music, and combine that with the love for his own traditional music from Peru.

I closed the set by discussing what I had brought. My “object” was intangible: my love of art and storytelling. It’s something that has been passed to me through my parents and their parents before them, who migrated across three continents in one lifetime. (Four, if you include my own move to the United States.) I talked about my upbringing in England, my career in Scotland, and my parents’ arrival in the UK from the tropical heat of east Africa as Ugandan refugees. My grandparents had been labor migrants to east Africa, helping to build the railroads when it was still part of the British Empire.

I also discussed the moments in our lives that profoundly affect us, and shape who we become. For me that was watching the twin towers collapse on TV with an American backpacker I lived with in Scotland. When I was telling my audience about this I noticed many people nodding. I imagine they were thinking about where they were at that same moment. Back in 2001, I realized I was a citizen of not just of one country, but of the world. The tragedy was what prompted me to begin organizing events, mini festivals, programs, and storytelling projects all geared towards mutual respect and understanding between people of different faiths, traditions, and cultures. I closed with a message that I often share: that we are all storytellers. We bring so much to one another’s lives through sharing and also listening to each other’s stories in more ways than we realize.

The other theme at the festival was Circus Arts, and it was interesting to see how it resonated with my own experience as an immigrant. It was a special bonus to share a hotel with hundreds of circus arts performers, many of whom are considered among the best acts in the world. There were artists from Russia, clowns, vaudeville acts, and aerial artists. You can just imagine the conversations and stories we shared. I attended my first circus in the big-top tent that was erected on the mall. Many could not believe I had never been to a circus before. I was quite taken with it, particularly the aerialist Dolly Jacobs, who recently received a National Heritage Fellowship from our friends at the NEA.

Through the festival programming, visitors (and artists) explored, discussed, and shared stories about how American communities and cultures have been transformed by the movements, displacements, and interactions of diverse populations. The festival brought together artists, musicians, and others from all walks of life to discuss what everyone contributes to make America what it is today. There were two Citizenship Ceremonies administered by U.S. Citizenship and Immigration Services on the National Mall in collaboration with the National Museum of American History. The keynote speaker was storytelling’s own Sheila Kay Adams, an acclaimed seventh-generation ballad singer.

The beauty in diversity is a huge part of why I took my job at ISC. It’s incredible to have the opportunity to bring together people from different cultures and backgrounds to form a sense of community and friendship—a goal that ISC’s Festival shares with the Smithsonian Folklife Festival. I believe this work builds a foundation for peace in our world. That’s one reason I was so honored to perform at this event: the stage is a sacred place that has the power to create a feeling of togetherness. Performance isn’t just entertainment; it carries responsibilities and purpose. My story is always in flux, changing as I move from place to place, from home to home. Meeting new “characters” and watching the plot unfold in unexpected directions is one of the great pleasures of both life and storytelling.