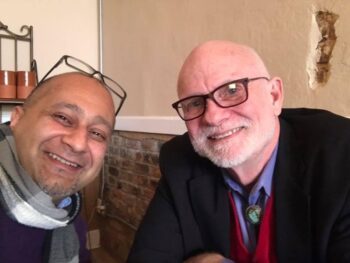 Fall is my favorite season. Here in East Tennessee, I love to observe the four distinct seasons from the stillness of my front porch. I particularly love the way the leaves begin to change color around the time of the National Storytelling Festival in October. I’m always reluctant to sweep up the fallen foliage on my lawn because I love the sensation of walking through a blanket of crisp colorful leaves.

Autumn is a season of reflection, a time to start nestling in at home, focus on cooking warm meals, and building up the fire pit in the backyard. The lead-up to the holidays is a natural time to reconnect with family and friends, and also with ourselves. We have the contemplative space to let go of the things that are no longer serving us, and to feel grateful for the things and people and places that nourish our souls.

We all have people in our lives that have influenced us, directly or indirectly: teachers, parents, friends and colleagues, or even strangers who we just admire. I’m talking about the people who have influenced our thinking and our passions and our work. I have written about some of my most important influences, including my parents and an especially beloved teacher, for this blog. Another person who has influenced my work very much, but who I haven’t really had the chance to write about, is ISC’s founder, Jimmy Neil Smith. So let’s fix that.

Jimmy Neil retired as president of ISC in 2013, after 40 years of service. I came to Jonesborough with big shoes to fill. In addition to founding the institution, Jimmy Neil was the brain behind the National Storytelling Festival. I truly believe he was a visionary.

I still remember our first meeting, which was within a week of my arrival in Tennessee. Jimmy Neil invited me to breakfast, which naturally turned into a three-hour conversation. We’ve had many more meals and meetings in the years since. Jimmy Neil has the mind of a folklorist—always asking questions, and being very present as he listens to the answers. He has often asked about my family, and the places and experiences that were formative to me in childhood. He is as interested in the events that shaped me and my opinions on world affairs as the business of storytelling. He’s interested in hearing everyone’s stories.

At the Center, Jimmy Neil continues to have a certain presence even when he isn’t here. I’m sure it’s often that way with founders who have poured so much heart into developing an institution. I often spend my lunch breaks in the park behind the Center. It’s a beautiful spot, and as it happens the park was named for Jimmy Neil. The space is small and intimate, not huge or flashy, and it’s rarely very busy.

There have only ever been two presidents of ISC: Jimmy Neil Smith and me. It’s amusing how much we have in common. Many of our staff who have worked with us both noted that we share many characteristics and quirks. We’re both early birds who thrive first thing in the morning. We both love bacon. We both chew our pens as we think up new ideas to put into action. And one time I showed Jimmy Neil the large sketch book where I note my ideas—and he had the exact same notebook that he uses for the exact same purpose.

There have been other small but fascinating coincidences as well. I once met Bill Strickland, a creative genius who was an advisor for the Bush and Obama administrations. Strickland has a belief that if you create a beautiful place, beautiful things will happen. When I returned to Jonesborough and told Jimmy Neil about this meeting and Strickland’s sentiment, Jimmy Neil told me that he had heard Strickland give a talk many years ago that expounded on the same philosophy. In fact, Jimmy Neil said that talk was what inspired him to create the International Storytelling Center: a beautiful place where beautiful things could happen.

Many people don’t realize that during the 1950s and 1960s, Jonesborough, the oldest town in Tennessee, was in a state of decline. The town’s sidewalks were cracking, its streets were crumbling, and many of its 19th-century homes and storefronts were deteriorating and empty. ISC and the National Storytelling Festival have brought international acclaim to Jonesborough and the region. In the early 1970s, when Jimmy Neil came up with the idea of celebrating the folk art of storytelling, he gave the first humble gathering the bold name of the National Storytelling Festival. But it grew into its name over time. I think that’s the cornerstone of his philosophy: envisioning a grand idea, and then working to make it happen. He talked about a storytelling revolution, and cultivated that big idea until it became real and tangible.

So much of ISC’s current work has been built on research and projects that Jimmy Neil started years ago. Our Project Zero initiative with the Harvard School of Education, for instance, helped us put storytelling theory into practice. Our partnerships with NASA, the United Way, and the Smithsonian Institute all began under his tenure—as did much of ISC’s work in education, health care, literacy, conflict-resolution, and international collaboration. So much of ISC’s mission comes down to Jimmy Neil’s ability to craft a dream that many of us could come together to realize and build upon.

Of course there were times when Jimmy Neil made controversial decisions. Any project that grows so fast isn’t going to please everyone, and will inevitably encounter some mishaps along the way. But when I think of Jimmy Neil’s legacy, I believe he will be remembered for developing this art form in service to the world, as a vehicle to bring people together. Storytelling champions causes, fosters dialogue, empowers people, and builds communities. And it turned Jonesborough into an exemplar model for Main Street towns around the country that needed to revive themselves from an economic slump to once again become something great.

With Jimmy Neil now in an honorary position as ISC’s president emeritus, he still serves the organization and the town. Together, we have attended community events as two faces of ISC’s work. In many of these places, I have been the newcomer, and he has graciously introduced me to people he knows. (In return, I have tried to teach him how to cook, but I’m not sure that we’ve made much progress on that front.) When I travel for work, colleagues still ask after Jimmy Neil. And we still get visitors at the center who became involved with storytelling in their own communities (some as far away as India) because they were so influenced by Jimmy Neil’s work.

As we move into 2022 and the 50th anniversary of the National Storytelling Festival, I’m thinking deeply about our vision for the future. That includes reflecting on our roots, and thinking about how we can expand our work over the next 50 years. From our first days, I think Jimmy Neil has very much tapped into the raw potential of storytelling to help his community, his region, his nation, and his world. He cultivated cultural assets that are still providing a return on investment to this day. His values were embedded in the organization from the very beginning. He knew how important it would be to preserve our archives from the early years of the National Storytelling Festival. And he was a champion of diversity and inclusion long before those became corporate buzzwords—all foundational beliefs that have served us well as ISC has grown and changed.

I think about storytelling a lot (obviously), and what I have come to believe is that we hear the greatest stories off-stage, around dinner tables and in cafes and on front porches and the like. Every day, we share our stories with one another. The conversations we have with friends and family and mentors over a lifetime develop and deepen in such an interesting way. Each conversation is like a little vignette of our lives.

Over the last eight years, I’ve had many early-morning conversations over breakfast with Jimmy Neil. When the Courthouse Diner closed, we moved to the Pancake House. You’ll find it right on the corner of Boone Street as you enter downtown Jonesborough. I recall that one day, as we were eating, Jimmy Neil looked out the window and described how much Jonesborough had changed over the years. In his early career, there was no traffic, much less traffic lights. Jonesborough has thrived, in large part due to his vision and care.

I imagine that we still have many meetings to come. I still have a few questions I’d like Jimmy Neil to answer. (Why does he always wear black? Why does he prefer a bolo tie?) And he has promised to make me dinner someday, though we’ll have to see how that goes. As I reflect on all the people who have made me who I am, I feel very grateful for everything Jimmy Neil has given us at ISC. Jimmy Neil has been a wonderful colleague. But more than anything, I treasure being his friend.