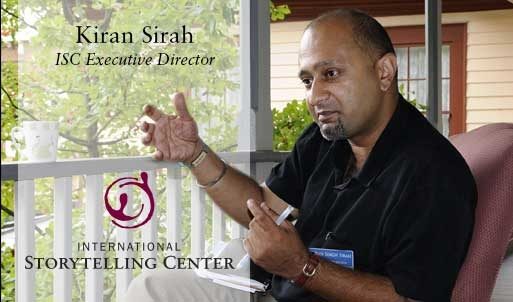 Sirah is a proven advocate for the arts who has spoken about the power of story at the United Nations Headquarters, where he delivered the keynote address at Rotary International UN Day in 2012. A Rotary World Peace Fellow, he comes to Jonesborough from Chapel Hill, where he earned a master’s degree (his second) in folklore at the University of North Carolina.

The bright and dynamic new leader has long been involved in arts programming, community service, and human rights in his former home in Glasgow, Scotland, where he spent more than 10 years in museum and charity management. A native of the United Kingdom, he brings international perspective to the ISC, an organization that’s dedicated to improving the lives of people around the world through the power of storytelling.

“From very early in our search for a new director, Mr. Sirah’s rich background in the arts and community-building distinguished him as a top candidate,” says Dr. William Kennedy, the chairperson of the board of governors at ISC. “As the vetting process wore on, his positive energy, his power as a communicator, and his sheer enthusiasm for the power of story impressed us just as much as his credentials.

“Building on ISC’s signature programs, the National Storytelling Festival and the teller-in-residence series, Sirah will usher in a new era of expansion and partnership for ISC,” he adds. “We’re confident that his leadership will be a boon, not only to our organization and the town of Jonesborough, but to the future of storytelling.”

Sirah is slated to begin work in August. The 2013 National Storytelling Festival will be October 4 – 6.