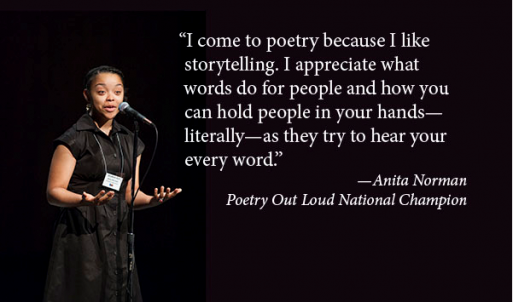 One of our special guests at the National Storytelling Festival in October was Anita Norman, a high school senior from Arlington, Tennessee. I met Anita last April when I served as a state judge for Poetry Out Loud, a recitation contest designed to help young people learn about poetry and build public speaking skills. My fellow judges and I were absolutely blown away by Anita’s talent. She won the state contest, and went on to win out of 365,000 of her peers to become America’s Poetry Out Loud 2014 national champion.

ISC had planned to invite both the state winner and the national winner to perform at the Festival. It just so happened the same person won both. In October, Anita wowed festival goers with several selections, including her own original work. Her performance was broadcast to schools and other institutions across the nation—more than 5,000 viewers altogether.

Anita wrote about her experience at the Festival as part of her college applications. Since she recently agreed to serve as ISC’s first special youth advisor, we asked Anita to share her essay here by way of introduction. We’re delighted to explore new ways to involve the next generation in our storytelling community with this bright young woman, whose commitment to artistic excellence continues to inspire. –Kiran Singh Sirah

In certain situations, we can never fully recognize the magnitude of what has occurred until the moment is gone. Then we are left to reflect on every detail. One such moment for me was being invited to participate in the 2014 National Storytelling Festival as the youngest performer. I have spoken at a variety of venues and hardly ever know what to expect, but this particular festival was an event like no other. Thousands of people drifted in and out of tents as storytellers weaved words into memories both dramatic and humorous. It was intimidating to think about my place in this scene.

I stood on a stage with a single microphone. All eyes were on me, a feeling that was quite overwhelming. The challenge in that moment was to conjure up authentic emotion—to be vulnerable and fearless. In a tent filled with expectant listeners, it was crushing to think about being so open, but I understood that the only real disappointment would be not showing my true passion. So, I gave the audience everything I had, and in turn they gave me support, encouragement, and stories of their own.

This sort of communication is responsible for the smallest and largest connections in life. The National Storytelling Festival is centered on communities coming together to listen. Not to hear, but to truly listen. I think of the lonely people of the world, the misunderstood, the uncelebrated. Listening to their stories opens up doors and relationship possibilities that are far more peaceful in nature than arguing or ignoring. I learned that good communication is often hidden to my generation, even though it is a historically verified avenue to creating change in our communities.

The most powerful part of the experience was not the fact that I spoke or that the most brilliant storytellers in the world were there, but was that I witnessed firsthand that people do in fact understand and desire intimate communication. There is a community rooting for a lost art form and the mental images it creates. People understand the struggle and soul behind words. They understand the sacred and the humorous, the tragic and the triumphant. I left the stage having shared pieces of myself, and I was grateful for the connection I shared with my many listeners. I finally understand that the educational world is very much in need of spaces like these where truth comes to be heard. Now more than ever, I hold closely to the belief that storytelling connects individuals. It heals.