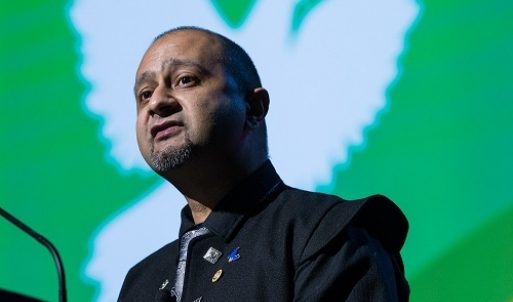 The first-time designation will be presented on Rotary Day, which celebrates the UN’s long-standing relationship with Rotary International (RI), a 1.2 million-member humanitarian organization with global reach. RI helped draft the charter for the United Nations in 1945.

The inaugural Champions of Peace were chosen from a global pool of nominees for their commitment to finding innovative approaches to conflict-resolution, poverty, inequality, and education. The nominees went through a vigorous vetting process that began in June, when more than a million Rotary members were asked to submit nominations. Sirah, who became a Rotary Peace Fellow in 2011, was nominated by Rotary District 1020, in Scotland, where he lived before moving to the United States. The honorees were handpicked from a group of semifinalists by Ian H.S. Risely, president of Rotary International.

Through his work at the International Storytelling Center, Sirah is a world leader in using storytelling as a tool for social change. Over the last year alone, Sirah has worked with the Pentagon, the U.S. State Department, and the City of Charleston on storytelling-based strategies for resolving conflicts and coping with post-traumatic stress.

“Storytelling is one of the most exciting and effective tools we have to build peace and understanding within our communities here in the U.S. and around the world,” says Sirah. “But all too often, this vital tool is overlooked. I’m honored to have been named a Champion of Peace, and thrilled for the opportunity to share strategies on how we can use storytelling to build a better world.”

In Geneva, Sirah will give a presentation about storytelling as a community-building tool that can promote peace, empower marginalized populations, and start cross-cultural dialogues. He also plans to extend an invitation to an international delegation of humanitarian experts to visit Jonesborough.

The International Storytelling Center is an educational and cultural institution dedicated to enriching the lives of people around the world through storytelling. It produces the widely acclaimed National Storytelling Festival, an annual gathering of world-class storytellers in Tennessee’s oldest town. The 2017 Festival will be held October 6-8, in downtown Jonesborough.