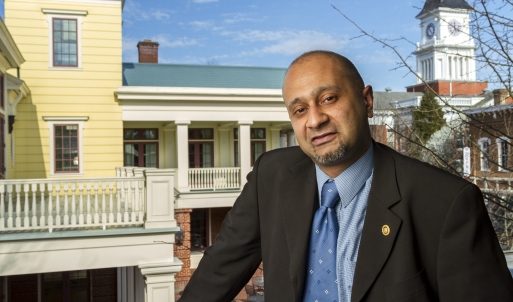 The goal he has in mind, as the president of Jonesborough’s nonprofit International Storytelling Center, is to promote peace and education through the art of storytelling.

“Everyone is engaged in stories — even the stories put out by the media can affect the stock market,” he said. “But what if we used this power to build a better world?”

And Sirah sees all corners of this world, as he strategically picks speaking opportunities to convey the message he calls “his love.” East Tennessee has the opportunity to build upon its brand as the “storytelling capital of the world,” he said, and to help build on that and his message of peace, Sirah goes near and far.

Most immediately, Sirah will be bringing a gift — one of famed storyteller Bill Lepp’s children’s books — to the beloved Dolly Parton at Dollywood. As the person who tops the list of meet and greets, should Parton have time, Sirah plans on discussing their common love of books and storytelling.

Dollywood, specifically its recently opened DreamMore resort, has partnered with the ISC and its world-famous International Storytelling Festival to help subsidize tickets for Tennessee’s students. The center also consulted with the resort’s staff to help include storytelling in its day-to-day operations.They’re trying to get the message out in as many ways as possible.

It’s those schoolchildren in the isolated and more rural parts of the state that could benefit most from exposure to the festival and all that goes along with it throughout the year, Sirah said. They also work with the Coalition for Kids and local libraries to give complimentary entries to the festival.

Sirah said they’re also looking at more local ways to integrate storytelling into health care as means of a peaceful additive to healing.

More than 100 students from Johnson City schools took part in the festival in 2015 through this program, and Sirah says he sees that number growing. Each person who attends has fun and learns through storytelling, he said, turns into an ambassador of the movement — which is important.

During last year’s festival, more than 35,000 people across the U.S. tuned into the festival via its live-streaming option. This costs about $6,000 per year, and was funded through the Niswonger Foundation. Through dollars brought in across the world, by people who believe in Sirah and the center’s message, they are not only able to keep the lights on, but expand the storytelling network.

Locally, the economic impact of the yearly festival is north of $7.6 million, with all the lodging, eating, retail and periphery businesses benefiting from a festival that brings in people from all 50 states and several countries across the world.

When travelers come in for the festival, in a partnership with Dollywood, the goal is that they stay in East Tennessee for two weeks, rather than one week.

To get the word of the benefits of storytelling out there, Sirah stays busy with speaking engagements. Following last year’s massacre at the Emanuel African Methodist Episcopal Church in Charleston, South Carolina, Sirah was invited to tour the site and give a talk about storytelling, race and conflict resolution.

He recently taped a TEDx Talk in Nashville, in which he tells his own story.

Following his visit to Dollywood, Sirah will give a lecture at the Library of Congress in Washington, D.C. He’ll be doing so in celebration of the 40th anniversary of the American Folklife Center there as part of the Benjamin A. Botkin Folklife Lecture Series.

The topic of this talk will be the power and artistry of storytelling as an ancient art form and as the world’s oldest form of communication.

“We at ISC have always recognized that the art of storytelling can be harnessed as a powerful tool to build community,” Sirah about the lecture. “We’re honored to have this essential work acknowledged by our friends at the Library of Congress.”

*Article published by our friends at the Johnson City Press