In July, the International Storytelling Center welcomed a new team member into its Main Street headquarters: Ben Weakley, who will serve as the organization’s Director of Development. 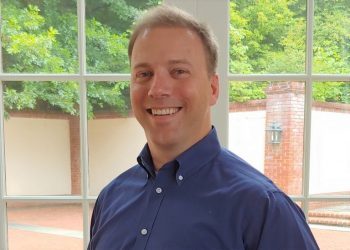 Ben’s arrival ushers in an exciting new era of expansive growth for ISC as it approaches the 50th anniversary of its flagship National Storytelling Festival next year. Building on the organization’s long-standing partnerships with iconic institutions like the Library of Congress, the National Endowment for the Arts, the National Endowment for the Humanities, Dollywood, and others, he has been tasked with cultivating relationships with foundations and coordinating major gifts to help ISC sustainably scale up its worldwide operations for greater mission-driven impact.

Ben was a local candidate whose credentials and passion stood out during ISC’s nationwide search to fill the position. He comes to ISC from a similar role at East Tennessee State University, where he served as the Director of Development for Clemmer College. A beacon for the region’s future educators and leaders, Clemmer’s focus is on teaching, learning, and sports—areas that naturally aligned with Ben’s distinguished background in the U.S. Army. As an experienced fundraiser and an accomplished poet, he brings a fierce appreciation of the arts to his new role at ISC.

Ben spent 14 years serving his country with tours in Iraq and Afghanistan as an engineer officer for the Army before moving to strategic roles at the Pentagon, in Arlington, Virginia. In varying capacities throughout his time in the Army, he honed high-level communications, directed funding proposals and strategic development for science and technology initiatives, analyzed policy issues for senior executives, and led on-the-ground operations in support of counterterrorism efforts.

A Tennessee native, Ben returned to the region with his wife and children when he retired from the military in 2019. His experience, along with his longstanding interests in social justice and community building, naturally translated into high-impact work with philanthropists and other partners who wish to support the next generation of leaders, educators, and communicators.

At a glance, Ben’s career path may seem a little unusual for someone appointed as an advocate for a nonprofit cultural institution. But he credits the arts with helping him make the shift from high-stress military situations into gentler civilian life, a transition that many veterans find difficult for a variety of reasons. Ask him sometime, and he will tell you how writing and sharing his story saved his life.

Before the events of September 11 led him to join the Army, Ben studied journalism in college. Those practical skills helped him communicate effectively as a leader on the ground, and later, as he crafted messages and liaised with mainstream media in his tour at the Pentagon. Even as he honed that expertise, Ben also nurtured an artistic impulse as a poet. This creative capacity has been an essential part of his life and work as he has processed his experiences abroad and sought new ways to build a better world as a private citizen.

Ben’s award-winning poetry, which has been anthologized in Our Best War Stories, is on one level a private meditation on existence, combat, and conflict. On another, his work has been a form of outreach—an act of encouragement to other veterans who may wish to share their stories, and to the civilians who urgently need to read and listen. He has also led workshops for veterans, helping to create a space for people who need to speak difficult truths.

Across his career, Ben has witnessed the transformative power of a story well told. He sees storytelling not only as a useful tool in everyday life, but also as a profound practice that enriches our inner lives. At ISC, as with his previous employers, Ben’s focus will be on helping people realize their potential. Watch this space to learn more about the role you have to play in his vision for ISC.