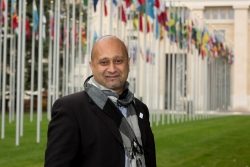 I recently gave a talk at the United Nations about storytelling as a radical gift of hope. It was actually the second time I had spoken in front of the UN (the first was shortly after I had moved to the U.S., at the organization’s New York headquarters), but my first visit to the Swiss location, in Geneva. I was there to be honored as a Champion of Peace—one of six who had been nominated by our fellow Rotarians, selected from a global pool, and then chosen by the president of Rotary International (RI) himself. It was an incredible honor, particularly considering that RI has around 1.2 million members. It felt good knowing I was taking so many people’s well wishes there with me.

We six champions arrived on Thursday, flying into Geneva from all different parts of the world. (Now that I’m living in the U.S., I sometimes forget that I still hold an EU passport!) Leaving the airport, I actually walked out into France instead of Switzerland. Fortunately, my broken French and some helpful strangers were enough to put me back on the right path, which was just a few meters away.

At the hotel, we six “champs” had the opportunity to get to know one another, and explore Geneva a bit. A friend took me out for fondue, a cheesy Swiss specialty. Pictures of past presidents and global leaders who had stayed at our hotel were hung throughout its lobby. Like Goldilocks, I had to wonder who had been sleeping in my bed.

Not long ago I met a man in New York City who told me that the word for medicine in his culture also means storytelling. (He was from Sierra Leone.) I realized that I’ve always thought of storytelling as a form of medicine in that it has the potential to heal people, communities, and nations. ISC’s founder, Jimmy Neil Smith, often reminds me that if each one of the 8 billion people on our planet told a story, that’d be 8 billion ways to support the storytelling revolution. And I truly believe that storytelling offers us a vehicle to connect with others, whether you’re sitting around the dinner table or going to work or attending a festival. Wherever you are, a story provides an instant way to belong. So that’s what I settled on as my talking point during my time in Geneva.

Before the big event, we had a formal photo shoot by the flags, which was a little bit surreal, then had a guided tour that was personalized just for us by the UN reps. We visited the rooms where negotiations take place behind the scenes, as well as the interpreters’ boxes. One of interpreters told a great story about how one U.S. president told a joke that the translator couldn’t effectively interpret into Japanese. Instead of translating, he said, “The president has told a joke. Please laugh!” Later, the president himself congratulated him on doing such a good job with it.
As we toured the UN, we also saw some of the many gifts donated by nations from across the world, including an assembly room with a wall sculpture donated by Spain. It was like walking around a museum where each object and each painting told its own story. In the corridor that connected the UN building with the original League of Nations building, there was a series of large-scale commissioned photographs. The images included many different peaceful moments: children playing, mountains, forests, and traditional ceremonies from all over the world. It felt like a poignant reminder for why we were there. We also saw one of the original UN flags that had been damaged due from an attempted terrorist bombing—a reminder of those who wish (or who have actually tried) to destroy the very notion of nations working together.

Leading up to the awards ceremony, I enjoyed a lot of nice lunches and dinners with the other honorees. We had the chance to talk (previously, we’d only chatted via Skype), and even practice our speeches. We attended a special lunch in our honor in the UN restaurant, which had what must be the best view in Geneva.

Later the same evening, two of us were invited to present at a private benefactors’ dinner that included senior Rotarians and numerous guests from philanthropic organizations from around the world. It was great to have the opportunity to answer their questions, and to speak more informally on our work at ISC. I also got to tell them about how being a Rotary Peace Fellow has impacted me personally. To my great delight, we were joined by Rotarian representatives from Scotland, the very people who had nominated me for the award in the first place. We all wore our kilts, which was great fun.

The kilt I wore that day (I have two!) features the Scottish Singh tartan. It was commissioned by Laird Iqbal Singh, a Scottish Sikh entrepreneur who owned a castle. (In addition to being a businessman, he also translated the poetry of Robert Burns into Urdu and Punjabi.) His great love was a Swiss woman, so his tartan, in addition to colors representing Sikhs, Scotland, and India, included a line of red to honor her. It seemed fitting to wear that kilt in Switzerland—and it proved to be a good conversation starter with my new friends.

Our main event, which was also the culminating day of Geneva Peace Week, was the formal ceremony, which included my talk. Our speeches were just two minutes each, which isn’t much time. I told a very short story to convey a simple message: storytelling has the power to promote peace and facilitate dialogue anywhere and everywhere in the world. With such an international audience (more than 1,000 people from more than 80 countries), I slipped in a little French, Spanish, and native Tennessean (“y’all”) before launching into my story. I focused on the fact that storytelling has always been a democratic art in that it belongs to everyone. It can also be a great platform for empowering people, especially the voices of the marginalized. It’s not important that for everyone to agree; the point is that everyone should try to understand.

One of my favorite moments of the trip had to be asking to do a selfie from the main stage after our formal presentations. A bit cheeky—but it went down well.

After one last celebratory dinner in the Palais de Nations restaurant, I flew to England to visit my dad. Back at home, over a cup of good homemade Indian British chai tea, I gifted my dad with the award I had won since he (along with my late mother) was the one who has been my champion of peace. After a few days with family I went to Scotland, to see friends, more family, and former colleagues—and BBC Radio Scotland invited me to pop in for an interview about my work in peacebuilding and storytelling.

Now that I’m back in the states, I’m realizing how much the award has energized me to redouble my efforts to advance the role that storytelling can play here in Tennessee, across the United States, and throughout the world. I’ve always thought of myself as a citizen of the world, and my dream is that, one day, everyone will think of themselves that way, too. The world is not so large as we think it is, and we can use our stories to forge connections, build friendships, and learn from one another.

Being named one of only six Champions of Peace in the world has been an incredible honor. I’m proud of my work, but I’d be remiss not to thank all the people who support it, and me—I wouldn’t be here without them—as well as spreading the storytelling revolution in their own way, on their own time. We don’t have 8 billion yet, but we’re getting there. The first era of our history as an organization was about about making a place for storytelling in the world. I truly believe that the frontier we now face is to make a place for the world in storytelling.