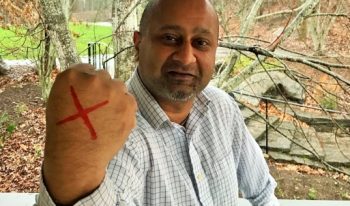 In Scotland, many years before I came to work in East Tennessee, I once heard Lonnie Bunch speak about the legacy of transatlantic slavery. (He’s the historian who founded the Smithsonian’s National Museum of African American History and Culture.) At the time, museums and arts organizations in Glasgow were trying to find ways to tell the “hidden” stories behind our city’s history with slavery. Glasgow had made its fortune on the back of slavery in the U.S., but a lot of people weren’t aware of its role in that terrible time in history. The reason? No one was shining a light on those stories.

Something that Bunch said to us has stayed with me all these years. “One cannot tackle racism without grappling with the legacies of slavery, yet few want to actually discuss it.”

Now that I’m the president of the International Storytelling Center (ISC), I have special insight into just how important those discussions are. I’ve seen how stories help people understand the past, interpret the present, and plan for the future. ISC has developed and implemented peacebuilding and human rights initiatives around the world, especially in conflict resolution and prevention.

ISC also wants to support other people and organizations that believe in our mission of making the world a better place through the simple act of sharing a story—especially here in Tennessee. As part of that work we’ve teamed up with Senator Bob Corker in his quest to end modern slavery. You can learn more about it online at enditmovement.com.

Senator Corker’s bipartisan legislation, which was passed in December, will help abolish child soldiers, trafficking, and all forms of unpaid labor around the world. His End It movement wants to “shine a light on slavery.” By simply raising awareness—through stories and discussion—we can all help.