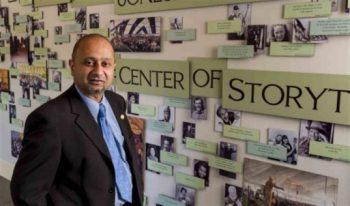 Editorial by Nathan Baker of the Johnson City Press.

“We’re the people who will be wounded the most,” Sirah said Friday. “If we have to rely on only philanthropic support, we will suffer, because we don’t have donors with pockets as deep as some of our urban counterparts have.”

According to political news website The Hill, President Donald Trump’s transition team members were drafting a budget proposal before his inauguration to cut federal spending by $10.5 trillion over 10 years. Team members worked with people affiliated with conservative think tank the Heritage Foundation and the Republican Study Committee, a caucus representing a majority of Republicans in the U.S. House, to draft Trump’s upcoming budget proposal.

Both organizations have recommended in the past to eliminate funding for the arts grant agencies, and staffers told The Hill that those reductions would be included in the president’s recommendations, along with the privatization of the Corporation for Public Broadcasting, which currently supports the Public Broadcasting Service and National Public Radio.

The NEA, which provided 2,300 grants, and NEH, which funded 882 projects, accounted for slightly more than .002 percent of federal discretionary spending in 2015.

Because discretionary spending is renewed periodically by appropriations bills, it’s easier to cut than mandatory spending written into law, like Social Security benefits, Medicare, and Medicaid programs. In 2015, spending on defense was $598.5 billion, 54 percent of all discretionary spending. Historically, cuts to military spending have proven almost as difficult for politicians to make as those to entitlement programs.

Sirah, who also serves on the board of the nonprofit Tennesseans for the Arts, said the loss of the $130,000 provided through the arts agencies from the Storytelling Center’s $1.2 million budget won’t force the organization to close its doors, but it will hurt its mission to provide disadvantaged children with programming.

Educational programs funded by the grants serve 1,700 at-risk students, primarily from Northeast Tennessee. Other funds are used to subsidize tickets for summer concerts at the center, helping to hold ticket prices to $5 for family events.

“What would suffer if we lose this funding is our capacity to enhance the work we do, specifically for underserved communities,”  Sirah said. “It would hinder our abilities to work more strategically to reach those people who need it the most.”

The NEH funding is also a matching grant, which helps fundraising efforts, he added. When he can tell potential donors their dollars count double, Sirah said it helps convince them to contribute.

Losing that leverage may result in lower contributions, he said.

Every year, the International Storytelling Festival hosted in Jonesborough brings thousands of tourists from across the country, adding $7.6 million to the local economy through dining, fuel and hotel stays. Sirah said the center’s programs also support 111 full- and part-time jobs in the area, from those who set up the tents for the festival to the storytellers who take the stage.

“It’s an excellent example of how the arts generate income for communities, and gives them a sense of pride,” he said. “If these two organizations get eliminated, it takes away the opportunity for having arts for everyone. It shouldn’t be a partisan issue to keep funding these endeavors.”

Sirah encouraged people who value arts programs, locally and nationally, to contact his or her representatives in Congress to politely urge him or her to ensure the NEH, the NEA and other arts programs are funded in the upcoming federal budget.

If you believe the arts and humanities matter, you can to write to your senators and congressional representatives. Joining the Arts Action Fund is free and a list of your representatives will be there. Simply tell them why the arts and humanities matter to you and ask them to do what they can to keep these important agencies for all Americans. It takes two minutes! Thank you. http://www.artsactionfund.org/pages/action-center