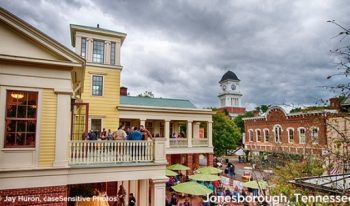 Welcome to the Storytelling Capital of the World

As living pieces of American history, our Main Street communities each have a story to tell. It’s up to us to bring those stories to life. Situated on Main Street in Jonesborough, Tennessee, the International Storytelling Center (ISC) has been uniquely positioned to lead a neighborhood-wide effort to tap into its shared story for revitalization and community building.

ISC’s signature event, the National Storytelling Festival, has been a natural focal point as the town has evolved, bringing together different people and fostering dialog among its vast audience, professional tellers, and local residents (many of whom form ISC’s huge volunteer base).

Tucked away in the Appalachian Mountains, Jonesborough is a natural home base for the ancient and vital art of storytelling.

Jonesborough’s Main Street has been “in business” since 1779, nearly 20 years before Tennessee became a state. Almost two centuries later, in 1973, the town would play gracious host to the first annual National Storytelling Festival. The audience was around 60 souls—local folks—and the stages were composed of wagons and bales of hay.

Now in its 44th year, the Festival draws more than 11,000 people from all over the U.S. (and beyond) for the first long weekend in October. The town of Jonesborough, too, has flourished in that time, with economic development tied to restoration projects, new business, and strong community building.

This is the story of how ISC helped Jonesborough become the storytelling capital of the world.

In 1975, two years after the first National Storytelling Festival, the institution that would eventually become the ISC was founded. The 1970s were a time of intense planning for renewal and growth in Tennessee’s oldest town. ISC founder Jimmy Neil Smith was heavily involved in Jonesborough’s revitalization efforts, and over time the work of the organization became an integral part of the identity of the town itself.

The town’s goal was to preserve its historic identity even as it evolved into a community that suited modern residents’ and workers’ needs. (Cobblestone streets are charming; outdated utilities, on the other hand, are more of a nuisance.) Developers pursued historic restoration projects alongside infrastructure updates.

Along the way, town planners recognized the value of creative placemaking—that is, the practice of using the arts as a vital tool for economic development alongside more traditional categories like education and land use. Even in its early days, it was clear that ISC was not just an important cultural institution in Jonesborough or even the region; it was driving the professionalization of the storytelling industry worldwide. The town’s branded identity formed around the burgeoning success of the National Storytelling Festival, which added to its appeal as a tourist destination. Soon enough, Jonesborough became known as the “storytelling capital of the world.”

Just as Jonesborough has woven storytelling into its identity, we at ISC have woven Jonesborough into ours. Our administrative offices are on Main Street, in the Chester Inn, a historic building that dates back to the 1790s. Our state-of-the-art storytelling hall is next door. For six months of the year, our Teller-in-Residence (TIR) program hosts a new performer each week, offering daily matinees and special evening concerts from May through October. We partner with local restaurants and shops so our ticket holders can receive discounts at neighborhood businesses.

Our annual Festival, too, is embedded in the downtown experience, with big-top tents woven in amongst the town’s historic buildings and natural landscape. Through the Festival, TIR, and other special programs, ISC produces more than 300 hours of live storytelling for the community ever year—providing entertainment (for tourists and locals), promoting economic development, and building community. Local merchants have embraced storytelling as an art form and as an economic tool, and storytelling itself is built into the town’s culture beyond ISC’s work, including a storytelling guild that meets weekly.

Jonesborough’s relationship to the art of storytelling is obviously unique, but we at ISC encourage other communities to think about their storied assets as they envision and build a downtown experience. For our town, that asset is itself storytelling; other towns may have unique cultural assets like landmarks, local heroes, specialties, or cuisines that they can develop and promote using storytelling as a tool.

We at ISC have guided Jonesborough in using its unique cultural asset—storytelling—to build community, inviting residents and business owners to take part in a shared (and developing) narrative. It has helped

townspeople think about who we’ve been, and who we want to be as we promote cultural development and positive social change.

At the same time, as a storytelling mecca, we’ve had the privilege of celebrating other communities from around the world as our visiting performers and audience members bring pieces of their lives here to Jonesborough.

Storytelling is, at its core, a simple act that has an incredible power to connect people. Our goal at ISC is to use storytelling to enrich the lives of people everywhere. In Jonesborough, it’s helped bring the town together to celebrate its history as it moves forward. At the same time, it keeps us connected with different people and experiences from all over the world.

Kiran Singh Sirah is President of the International Storytelling Center, producers of the world acclaimed National Storytelling Festival, based in Jonesborough, Tennessee. An advisory member to UNESCO and a Rotary Peace fellow, he has developed educational programs and publications, articles, talks and conference papers about interdisciplinary approaches to relationship building in communities and around the globe.