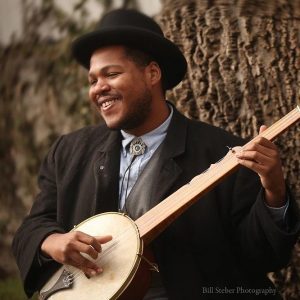 Although only 30 years old, Jerron “Blind Boy” Paxton has earned a reputation for transporting audiences back to the 1920’s and making them wish they could stay there for good.  An amazing multi-instrumentalist – he plays banjo, guitar, piano, fiddle, harmonica, Cajun accordion, and the bones – his ability to transform traditional jazz, blues, folk, and country into the here and now, coupled with his humor and storytelling, make for a uniquely exciting  evening. Paxton was featured on CNN’s Great Big Story and appeared in the award-winning music documentary American Epic, produced by Robert Redford, Jack White, and T-Bone Burnett.

“It’s not uncommon for his audiences to whoop, holler, and stomp in unison — hard enough to shake the floor. Paxton shifts from piano to guitar to fiddle to a five-string banjo that looks like he time-traveled to the 1920s, stole it from a juke joint, and dropped it on the ground a few times on the way back.” – The Village Voice