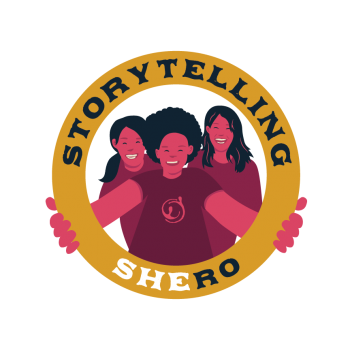 You’ve probably heard about the hero’s journey. But for the last two weeks here at the International Storytelling Center, we’ve been obsessed with the shero’s quest, working with a terrific group of eight young ladies to meet in the magic zone where stories intersect with real life.

The SHEro’s Journey Day Camp, as it’s officially known, was the second iteration of ISC’s Stories for Change summer youth initiative. (Check out this short video to learn more about what we did last year.) The new two-week program was designed to help 10- to 13-year-old girls think critically about how they can use fairy tales, folk tales, fables, writing, and performance to explore their own identities, as well as find their place in the wider world.

The 10- to 13-year-old “tween” age range was identified by our experts as a critical time when girls develop—or more to the point, lose—self-confidence. Research suggests that girls’ self-esteem takes a dip that their male counterparts don’t necessarily experience. It doesn’t help that some of the mainstream stories they’re exposed to, like the Disney princess films (which we love, but are still lacking in diversity), aren’t necessarily ideal role models.

With financial support from the East Tennessee Foundation and a handful of other organizations around the region, the SHEro’s program took advantage of the ISC campus and other local resources to help our kids take a deep dive into different kinds of stories, and also learn how to articulate original tales that were influenced by their own lives so far.

Home base was the ISC library, where our communications coordinator Rachel Stiltner helped lead the group in exercises such as story circles, peer collaboration, reflective work, and empowerment exercises—all of which were designed to help the kids think critically about the many roles that women play in the world.

We were lucky to partner with some of our friends from the community, including Dr. Pamela Miller (“Dr. Fairytale” to the girls). Dr. Miller shared how a fairy tale like Cinderella has hundreds of different versions, including several that are native to Appalachia.

We were also lucky to collaborate with Jules Corriere, a local playwright and the McKinney Center’s ambassador for the full two-week project, as well as a host of other vibrant, successful teaching artists from Jonesborough and Johnson City.

In addition to on-site work at ISC, the girls made several offsite field trips, including to the McKinney Center, a local multiuse arts facility, and the Jonesborough Repertory Theater, where they picked out costumes for characters they designed themselves.

Over the two-week period, the girls worked extensively with traditional oral tales and fractured fairy tales, a genre in which many of our master storytellers work. (Perhaps you’ve heard a few fractured fairy tales if you’ve been to the National Storytelling Festival.) We gave characters (including the Disney princesses!) “makeovers” so they could better speak to the issues and dreams of different kinds of girls. Throughout, we focused on the stories’ central messages and how they shape the lives of girls and women—for better and for worse.

The girls worked hard to develop new characters born in their own imaginations, often inspired by their lives and families. They learned story writing techniques such as storyboarding and workshopping to help develop and refine the characters.

At the end of the two weeks, the girls unveiled their characters at a special recital for parents and community members. About 50 people attended.

ISC’s hope for future years is to refine the programming so that our SHEro’s Day Camp will be expandable and scalable to communities around the world. The next step will be to build the framework so other teams can easily pick it up.

Meanwhile, we had so much fun working with this bright group to boost their creativity and confidence! Learn more about Stories for Change here, and watch this space next month for photos and stories from their incredible performance on the final night of the program.

Stories in Motion is a regular feature in which ISC examines the fresh ways we see the power of storytelling at work in the world.