Freedom Stories: Unearthing the Black Heritage of Appalachia was a series of public discussions that brought together storytellers, scholars, and community leaders to trace the rich history of Black lives in Appalachia. Funded by the National Endowment for the Humanities and produced by ISC, the project explored the role that African-American stories have played in the struggles for freedom, equality, and justice.

With the final public panel having recently concluded, we took the opportunity to talk to Dr. Alicestyne Turley, the project director. 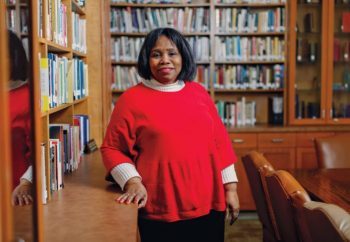 Tell us a little bit about your background and how you came to ISC.

My PhD is in early American history, and I’m also from the region. Prior to seeing the job listing for project director, I had never heard of the International Storytelling Center! I didn’t even know it existed.

In the project description, they were talking about unearthing the unexplored history of African Americans in Appalachia. I teach African-Appalachian history at Berea College. I’m very aware of the stereotypes of the region, which is that it was a predominantly white area with very few African Americans in it. That’s something I grew up hearing, but I also grew up with Black people in Appalachia. So I knew we were there.

How did you develop the format of the program? Who did you see as the audience for Freedom Stories?

Originally, the program was meant to be 12 public discussions held across the region in different locations. When COVID hit, there was a period of uncertainty before we decided to do it online. I think in many ways, holding the sessions online worked out so much better than it would have had we tried to do in-person presentations. We reached many, many, many more people by doing it online. The numbers have been incredible, in terms of how many folks watched and how many people are still watching. [Editor’s note: All the Freedom Stories panels are available to watch on the ISC website.]

We purposefully didn’t want to make this a series of academic talks. I wanted to aim toward young people, the everyday mom and pop, and Joe Blow, who don’t know this history because we don’t teach it in schools. It’s not anything that you would know unless someone took the time to tell you. The idea was to show how storytelling could bridge this gap. And so we just followed a formula, combining the performance of storytellers, academics who presented information on the history, and then public opinion and public input [with a question and answer period]. Those were the three elements.

The timing of the discussion was interesting in that Freedom Stories as a program had been in development for years before your first public event last summer, which just happened to coincide with a wave of Black Lives Matter protests across the United States.

The title of that first panel was “Do Black Lives Matter in Appalachia?” It was meant to be provocative. That was probably the hardest thing we ever did with each conversation. You had to have a title that people would be curious about. What can we ask that will make people perk up and agree to listen? We felt that by making it a question, it would get people to tune in. And it did.

It was almost as though we were tuned into the consciousness of the country. What we had been thinking about all of the sudden became this national topic. So that was very, very exciting.

It was nerve wracking. Earth shaking. And it really got us off to a great start.

Freedom Stories feels like part of a broader trend, a reframing of history that’s happening right now across the country.

The area of minority history is a very young one. The history of America is in the process of being rewritten, and it’s making people uncomfortable because it’s not what they grew up with. Historically, the way abolitionism is taught, it’s a Northern idea that was imposed upon the South. We’ve been conditioned to think that the liberators were the Northerners. No one looks at it from the perspective of how the Black freedom movement began in the South and moved North.

At the time of the abolitionist movement, 95 percent of all African Americans lived in the South. All these people who were actually impacted by slavery—what were they doing? How were they trying to end the institution? How were African Americans involved in their own liberation? Traditionally, these are not questions that get answered. That was an important part of being able to tell these stories. And it’s crucial to how we teach history and understand history.

As historians, we have to change our game a little bit. We can’t just talk about white men and political history. We have to talk about others who were here in this country and have been there as long or longer than Europeans, because their history is valid, too. But the problem you have is that we waited such a long time before we explored these histories that now we have to go back and try to piece them together.

It seemed like a part of the project was talking about the connection between the past and the present.

Many of the topics that we thought were historical turned into conversations about current conditions. That was one of the surprising elements. We were talking about the Jim Crow era, and some of the same things that happened in 1870 we’re basically dealing with right now. That’s the benefit of history, in my opinion: sometimes when you take a look back, you find out you’re not as progressive as you think you are. We haven’t dealt with the problems that we thought we dealt with. We moved on from them, but we never really resolved anything.

What advice do you have for people or organizations who are trying to organize conversations and dialogues around race in America?

I think usually people are fearful of problems that never really materialize. If you approach folks in an honest and sincere manner, most people will respond accordingly. But most of us are just afraid to take that first step. We’re afraid because we’ll be rejected or we’ll be criticized.

We wanted to make the Freedom Stories project broad enough and inclusive enough so that no one felt they were being fingered or targeted or talked down to. The goal was to say: “There are some stories out here that you haven’t heard. Wouldn’t you like to hear them?” We told them in the spirit of welcoming and encouraging people to talk about the diversity of Appalachia.

One of ISC’s goals with Freedom Stories was to confront its own blind spots as an institution. Can you tell us about that side of the project?

One of the reasons that Kiran [Sirah, ISC president] was so excited about the project was that he wanted to open ISC up to a larger African-American audience. He wanted them to feel as though they have a place there in Jonesborough. That was something he felt like ISC could do better, and so we just worked toward that goal.

Some of the storytellers I used from were from the National Association of Black Storytellers, who did not have a very close relationship with ISC. They did not see themselves as part of or welcome in that arena. And so I invited Mama Linda Goss, who was the co-founder and one of the former presidents of the National Association of Black Storytellers. She became one of my advisors for the project.

I think that side of the initiative was extremely successful. Everyone benefitted. We introduced new storytellers to the platform. And at the same time, we were mindful of the audience and tellers who have been with the organization for all these years. You want to say, “We’re glad you’re here. And there’s room in the tent for other storytellers.”

You recently organized the last Freedom Stories panel, which concluded the 12-part series. What do you see as the legacy of the project?

The 12 discussions are archived online, and anyone can access them for free. Along with that we have the Freedom Stories toolkit, which continues to grow. It has resources that our guests and our panelists mentioned. It has maps. It has photographs. Our hope is that people can now explore the parts of the history that they’re interested in. We wanted to give people resources and ways to follow up and keep learning.

In many ways, Appalachia was the original melting pot. There were Black, white, Indian, Irish, Scottish, and British people all in the mountains, and from there they went further West and developed the country. I think that often gets lost. Giving people that awareness, and having more people ask questions and visit the places we’re talking about, is just awesome.