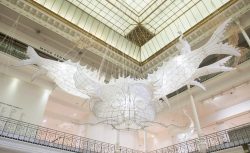 Ai Weiwei, China’s most famous living artist, recently staged an incredible show of new work in the city of lights. Though Paris is home to some of the most beloved museums in the world, Ai found an unusual home for the exhibit: Le Bon Marché, a high-end department store. The occasion? To prepare the shop for the influx of shoppers it hosts during its annual white sale—a job that would usually belong to a decorator, not a world-famous artist. The subject? Ancient Chinese lore, something most of us don’t readily associate with wares like handbags, lipsticks, and cufflinks.

The exhibit, “Er Xi, Air de Jeu,” featured 100 giant kites made out of bamboo and white silk. The fanciful installation marks an unusual turn for Ai, a political dissident whose art usually features a strong streak of activism. (His best known works emphasize the brutality of the Chinese government, though at the moment, he’s focusing on the experience of Syrian refugees.) Putting fine art in a retail space is unusual for any artist, much less a political one, but Ai is known for eschewing traditional spaces like museums. A man of contradictions, he has a not-so-serious side that onlookers sometimes find confusing. His Beijing studio has been compared to Andy Warhol’s factory, the central hub for the pop art movement in the 1960s. The idea of placing his work among people doing something so pedestrian as shopping (instead of, say, making a special trip to the “sacred space” of a museum) appealed to Ai, who’s built his career on thinking outside the box.

The exhibit was based on “Shan Hai Jing”—the Classic of Mountains and Seas—a Chinese collection of children’s stories that date back to before the Han dynasty, around 400 BCE. Like Grimm’s fairy tales, it consists of stories that have been passed down through generations. Filled with heroes and bad guys that Ai has described as “friendly, cheeky, and unfortunate,” the stories feature many different kinds of fantastical creatures, including dragons, hybrid fish-roosters, and a snake with a human head. Like most Chinese children, Ai grew up with these tales, which were an incredible source of inspiration in a country that wasn’t exactly known for nurturing the artistic impulse.

The exhibit also pulled from Ai’s personal mythology, especially his relationship with his father (who was Ai Qing, one of China’s most famous poets). Ai Qing had spent time in Paris in the 1920s and ’30s, so Ai grew up with his father’s stories of the French capital. The kites, too, were a throwback to Ai’s childhood. (The artist has said the first thing he ever made was a kite.) Some were wooden skeletons, where others were dramatically lit from within, casting a mysterious glow. To craft these intricate pieces, the artist worked with a dozen master kite makers in China’s Shandong Province. The team spent more than a year constructing the delicate creatures before the pieces were exported to France in huge custom-made containers. Though the kites were carefully placed throughout the store (requiring another huge team for the task), the effect was less like a curated exhibit and more as though the otherworldly beings were simply released into the store. Some settled into the windows. Twenty ephemeral creatures hovered over the cosmetics counter. Only one—a 63-foot-long dragon—kept his feet on the ground.

Stories in Motion is a new feature in which ISC examines the fresh ways we see the power of storytelling at work in our world.