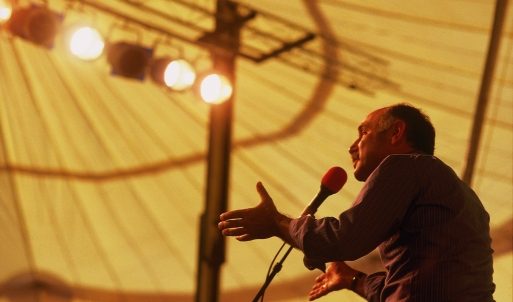 With heavy hearts, the International Storytelling Center marks the passing of Syd Lieberman, an elder statesman of the storytelling community, who died last week at the age of 71.

A twelve-time featured teller at the National Storytelling Festival, Syd was a familiar face in Jonesborough and a great talent in the industry. He was a gifted performer, an advocate for the art form, and a long-time supporter of our work at ISC. Together, we made storytelling history when, in 2004, NASA invited Syd into the control room to witness the first Mars rover landing. Jointly commissioned by ISC and NASA, he later shared the story of that historic event from the Festival stage—the first in what would become a series of groundbreaking collaborations.

As it happened, storytelling was Syd’s second luminous career; first he was a high school English teacher in Evanston, Illinois. While he was a Harvard man, his approach to education was anything but traditional. His classroom was a home away from home, outfitted with real furniture and posters on the walls. He took his kids on field trips to farms or into the city of Chicago, where he’d drop them off at different points to collect oral histories from the people they encountered. His unconventional methods—blindfolding students so they had no idea where they were going—once attracted the attention of the FBI, who pulled Syd over for questioning about his busload of “kidnapped” teenagers.

On a lark, Syd participated in a storytelling workshop in the summer of 1982, and he started performing at his local library soon thereafter. A prodigious talent, he was featured as a master teller at the National Storytelling Festival just five years later. His illustrious career was capped when he received the National Storytelling Network ORACLE Lifetime Achievement Award in 2013. It would be the last year he performed in Jonesborough.

As a storyteller, Syd’s natural style belied his consummate professionalism. His work was impeccably researched and technically masterful, but these qualities aren’t what his audiences will remember. His personality was bright—his warmth, palpable—and these gifts helped bring his characters to life. But what gave Syd’s stories their soul was his innate curiosity and deep appreciation for the potential he saw within each of us. His tales were about pilots and presidents and grandkids and townspeople, and each of them was singular. Exceptional. Remarkable. Syd understood from a young age that normal people could accomplish extraordinary things. A small man, you might not have guessed he was a football star in high school. But he had hard evidence: after scoring every point in the city championship, Syd made the local paper, which he saved for posterity. The headline—“Tiny Lieberman Proves Giant”—proved to be auspicious.

An English teacher through and through, some of Syd’s favorite pieces to perform were by Edgar Allan Poe. His stories stretched across five generations of his own family and deep into the history of his people. He was fond of Jewish folk tales, and he performed his story about one of the unsung heroes of World War II at the United States Holocaust Museum in Washington, D.C. Over the course of developing his many commissioned works, Syd also became a keeper of tales from some of the most critical moments in our nation’s history. His stories balanced the perspectives of grand historical figures with those of regular guys. His Civil War story was as much about a soldier named Isaac Taylor as it was about Abraham Lincoln. And his piece on the Declaration of Independence included everyone involved in the famous document’s creation, from Benjamin Franklin down to the lowly calligrapher, who was recruited from debtors’ prison.

Whether he was describing a group of NASA scientists or his kids, Zach and Sarah, the storyteller conveyed such a vivid sense of their spirits that you felt as though somehow you knew them. Each performance was an act of generosity. With Syd, his life’s work was literally his life story. Though we at ISC join the town of Jonesborough and the worldwide storytelling community in grieving that story’s natural conclusion, we’re deeply honored that he chose to share it with us.