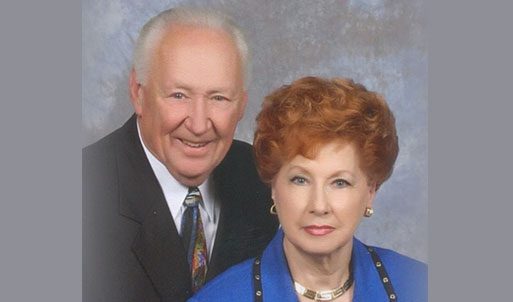 The International Storytelling Center is delighted to announce the dedication of the library in Mary B. Martin Storytelling Hall to two of our longtime friends and supporters, Sonia and Jim King.

The King Library, a popular space for events in the facility, will be key in ISC’s upcoming educational initiatives, providing a natural gathering place for talks, exhibits, and workshops.

Sonia King, a champion of the arts in East Tennessee, has supported ISC in a variety of roles over the years—first as an audience member at the Festival, and now as a patron and a member of our board. (A retired accountant, King serves as Secretary and Treasurer.) In between she worked as a volunteer in the Hall, which was named for her beloved mother, Mary, after an extensive renovation in 2009.

Like King, Sonia’s mother was a passionate patron of the arts and a true fan of a story well told. The dedication of the library in a building named for her mother means the world to King. “It was a big surprise,” she tells us. “I sat there and cried when they told me. I knew it was something she would really be proud of.”

As the storytelling capital of the world, Jonesborough is of course a natural home for the oral tradition, but it’s also home to many of King’s personal memories and stories. She’s always felt a particular connection to storytelling because of these regional roots. “I love Jonesborough,” she says. “As far as I’m concerned, it’s my place. My first grade school was there. Our farm was there. Even now, in the museum, there’s a picture of my grandfather with a T-model Ford. (He and another gentleman ran a contest to see who could get the most mileage from a gallon of gas—and he won!) I love its old-timey ways and its sense of heritage. Jonesborough has just always been in my heart.”

For decades, even when she and her husband lived hundreds of miles away, ISC has felt like a second home of sorts. “I think it’s fantastic and meaningful that there’s a place where people can come together and laugh and put aside their hardships,” says King, whose favorite tellers include Bil Lepp, Donald Davis, and Andy Offutt Irwin. “Everyone has a story, and what you do with it, and how you express it, can make a real difference in the world.”