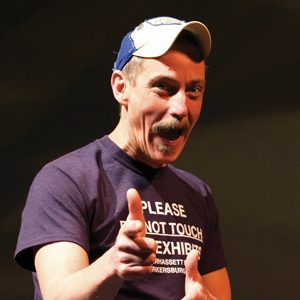 Bil Lepp’s family-friendly tall tales and stories have earned the appreciation of listeners of all ages and from all walks of life. Though he is a five-time champion of the West Virginia Liars Contest, Lepp’s stories often contain morsels of truth, which present universal themes in clever and witty ways. His amusing tales and delightful insights into everyday life have delighted audiences across the country, from grade schools to corporate executives to Comedy Central’s Hudson stage. His children’s books and audio collections have won numerous awards including the PEN/Steven Kroll Award, Parents’ Choice awards, and a NAPPA (National Parenting Product Award). Lepp has been featured on NPR’s Mountain Stage, and has guest-hosted the show as well.