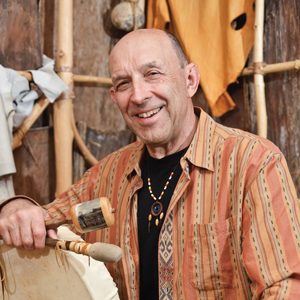 Joseph Bruchac is a writer, musician, and traditional storyteller who lives in the foothills of the Adirondack Mountains, in the house where he was raised by his grandparents. Much of his work draws on that land and his Abenaki Indian ancestry. Bruchac has performed widely throughout Europe and the U.S., including the British Storytelling Festival. Author of over 130 books, he is internationally known for his Keepers of the Earth series. Bruchac is also the Founder and Executive Director of the Greenfield Review Literary Center and the Greenfield Review Press.

“Joe’s performances are a multi-faceted combination of traditional Algonquian and Iroquoian stories and traditional instrumental music (Native American flute, drum, and rattle). He always performs to a packed house.”