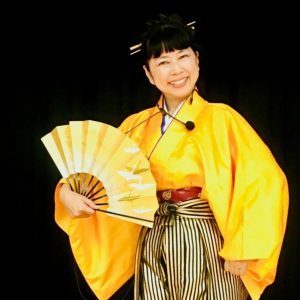 Born and raised in Japan, Karin Amano had already written, directed and performed a school play by the time she was eight. She trained in Japanese traditional dance as well as singing and acting, and ultimately moved to the U.S. in order to study educational theater at NYU. While in NYC, she performed numerous plays for young audiences, taught acting and dance summer camps for children in Central Park, and performed as part of traditional dance troupe, Minbuza, at the Japanese Folk Dance Institute of New York. Amano was a full-time storyteller and actor at Walt Disney World for 11 years, where she still performs annually at Epcot’s Japan Pavilion for Holidays Around the World.