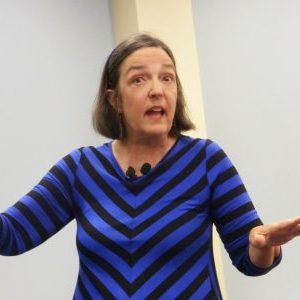 Lynn Ruehlmann grew up loving theater.  When she started acting onstage, she was even happier, and won a Folio Award for Best Actress in a Comedy.  She found storytelling in 1990, and has been telling and teaching storytelling across Virginia and around the country ever since. Her stories are drawn from people in her own life, from history, and from the larger-than-life characters of Greek myths. Ruehlmann’s storytelling CDs have won four national awards. In addition to freelancing as a storyteller, she has also performed for many years through Young Audiences of Virginia, who awarded her Artist of the Year.