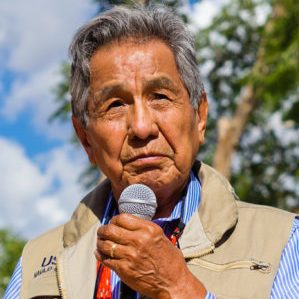 At the age of 15, Peter MacDonald, Navajo from Teecnospos, AZ, enlisted in the U.S. Marine Corps. He went through boot camp at U.S. Marine Corps Recruit Depot (MCRD), San Diego, CA. Following regular combat and communication training at USMCB in Camp Pendleton, CA, MacDonald, along with other Navajo Marines, was secluded from other Marines for top secret Navajo Code School. During the final phase of World War II (1944-46) MacDonald served in South Pacific as Navajo Code Talker and North China with the Sixth Marine Division.

He was honorably discharged with a rank of Corporal. He went back to his home community of Teecnospos, AZ After graduation from High School and Junior College in Muskogee, Oklahoma, MacDonald went on to University of Oklahoma and graduated with an Electrical Engineering degree (BSEE). He pursued graduate studies at UCLA while working as a Project Engineer on the Polaris Missile project for (Howard) Hughes Aircraft Company. MacDonald served as Project Manager for the manufacture of the Polaris Missile Guidance System and was a member of the elite Hughes Technical Staff (MTS).