One evening, somewhere in the English countryside, Peter Chand walked into a 17th-century pub as a retail manager. By the time he left, he was a full-blooded storyteller.

This small gathering of locals was a storytelling club: a modern-day Canterbury Tales, with people gathered around to impress each other with legends, myths, and folk tales. 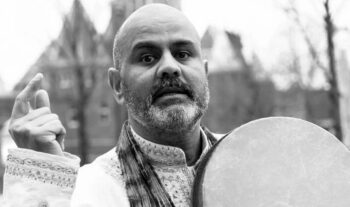 “It was a pivotal moment,” says Chand, who had been reluctant to go, but let himself be talked into it by friends. “It was a real eye-opener. I don’t even remember what story I told, but I was so enthused to be a part of it.”

When he walked into that pub, Chand supervised a team who sold PlayStations and videogames for a national chain—work that was “the antithesis of storytelling,” as he describes it. But once he understood himself as a performer, he began seeking out gigs on the weekends during his holidays. Six years later, he felt ready to move into professional storytelling full time.

That was 2006. That year, Chand began making dedicated trips to India to hunt and gather old stories. Chand’s parents had both immigrated to England from there in the 1950s, seeking better working conditions and an escape from the oppressive caste system. They joined a large Indian community in the Midlands, north of Birmingham, where Chand still lives today.

In India, he was thrilled to discover that his cousin’s wife was a deeply talented storyteller. “She’s the last of a dying kind of storyteller in India, really,” he says. He has collected folk tales from other people there, too, but finds her work especially compelling.

“She’s an incredible storyteller, even though she wouldn’t call herself one,” Chand says, explaining that storytelling is more embedded in Indian society than it is in Western cultures. “It’s not performance. She’s just telling stories that people have told each other for years. It’s as natural as breathing and eating, and I’ve been lucky to learn the kind of folklore that you can’t necessarily find in a book.” Some of the stories he has collected in Punjabi have been passed down through generations from mouth to ear.

While Chand had been to India many times before these storytelling trips, these tales were new to him; he had grown up with the language, but not the stories. “It would be nice for me to say that we were sitting around the fire hearing stories from my parents,” he says. “But they were too busy. They were working hard.” But the Punjabi language, which Chand spoke at home exclusively until he went to school, gave his understanding of the spoken word a deep richness that he still treasures and appreciates.

Chand will make his first trip to the United States—and to the National Storytelling Festival—this October, when he will debut as a New Voice in Jonesborough. On the stage, he’ll share a wide array of fun and accessible folk tales from India.

“I think folk tales are connected to the ground,” he says. “Folk stories are always about folk. They’re about people, relationships, heartbreak, and perseverance. These are the things have kept people preoccupied for thousands of years. These big juicy universal themes never change.”

Come see Chand and 20 other featured storytellers at the National Storytelling Festival, October 7–9, 2022.