Jeff Doyle has a classic origin story as a storyteller, having found his calling telling stories around a campfire. 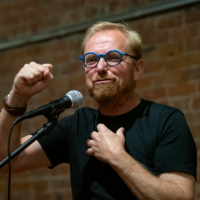 He and his kids had hooked up with a larger group for an old-fashioned father-led campout. Doyle had been waiting his whole life to feel “old and grizzled” enough to be a real storyteller, and this was his time to shine. He had a modest objective: to scare the kids. “My goal was to make a child cry,” he says. “It was not a very admirable goal, but I was successful.”

Tears notwithstanding, the children had an amazing time, and Doyle was delighted to have found a rapt audience. The kids were hungry for more tales, so Doyle started devouring books of spooky stories to add to his campfire rotation. “They had a voracious appetite,” he recalls. “Every time we went camping, I had to tell four new scary stories.” He had to read between 50 and 100 stories before he found one that felt just right so he could adapt it.

This selectivity soon inspired Doyle to develop his own material, a twist that surprised him. “I always knew that I’d be a storyteller someday, but I never knew I was a writer,” he says. He had struggled with reading in his own childhood, where an undiagnosed learning disability made books hard to enjoy. “Storytelling led me to get past my reading disability and become a writer,” he says. “If you had told me when I started that I’d create my own material, I would’ve told you that you were crazy.”

While many storytellers come to the profession by way of working in libraries and schools, Doyle is unusual in that he owns a homebuilding company for which he designs and builds residences. He finds that side of his work surprises people, but the two jobs have more in common than it might seem at first glance. “I think they’re both creative outlets,” he says. Whether he’s constructing a house or worldbuilding on stage, he likes the process of crafting something new.

Doyle enjoyed his nights around the fire so much that he eventually joined a storytelling guild in his home state of Michigan to polish his skills and perform for a wider audience. He came to the National Storytelling Festival as an audience member for the first time about 10 years ago, with his mother and daughter in tow. The family had a great time—and Doyle’s mother joked that she hoped she lived long enough to see him perform in Jonesborough.

Doyle was a popular Exchange Place teller at the 2019 Festival, and this will be his first time as a featured performer. He might tell a few scary stories, but his main focus these days is as a humorist, telling mostly true personal stories that have been crafted for an adult audience.

Doyle will be one of almost two dozen featured storytellers at the National Storytelling Festival, October 7–9, 2022. You can read our profiles of New Voices Brigid Reedy and Peter Chand by following the links.