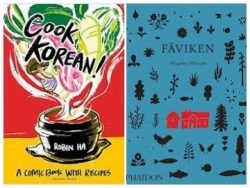 Heading into the brutal tail end of winter, we’ve found that we have warm kitchens and home-cooking on the brain. The next time you have a free afternoon, we recommend heading to your local library or a bookstore to spend some time thumbing through the cookbook section for inspiration. A great collection of recipes does more than just help you make dinner. It also tells you a story, or perhaps many stories—about different cuisines and cultures, about the author, and maybe even about yourself.

You don’t necessarily have to be a great cook to enjoy this activity, by the way. In an essay about the pleasure of reading recipes, Bee Wilson describes recipes as “stories of pretend meals” that have a narrative arc. “Every recipe, whether we cook it or not, offers a vision of the good life, and a way of tasting food in your brain,” she writes. She especially enjoys reading historic cookbooks, which she likens to adventure stories. Modern cookbooks too can have the same effect, especially when they’re about places you may never dine in person.

Take, for instance, the cookbook of a restaurant called Fäviken, which is tucked away on a quiet stretch of farmland in rural Sweden. The clothbound volume looks and reads like a folksy storybook, and in a sense, it is—unless your local grocer happens to stock Icelandic moss and pig’s blood, this cookbook exists in the realm of pure fantasy. Once upon a time, a chef called Magnus Nilsson caught all the fish for his tiny restaurant, often spending his mornings hunting for birds and berries in the forest. “It’s 8:00 a.m. and I am driving through a cold November spruce forest, the dark green trees heavy with snow,” Chef Nilsson writes. “If I were to stop and get out of the car, I would be met with nothing but dead silence.” From planning the day’s menu to washing up at the end of the night, Chef Nilsson narrates a regular Wednesday at his restaurant, and his recipes, like his food, tell a story about that place. “What we offer customers is a synthesis of [the historical province of] Jämtland, its traditions and its food, and the great determination of many people involved in different ways,” he writes. “And, of course, the exceptional location that is Fäviken, our unique place in the world.”

In The Food Lab, a cookbook by J. Kenji López-Alt, the author tells a very different story. A food writer who went to MIT, his tales are all about where food meets science. “I’m a nerd,” he proclaims, “and proud of it.” The way he writes his recipes is a window into his brain, which easily transitions from descriptions of life with his wife and dogs to the detailed laboratory-like experiments he conducts in his kitchen. Julia Turshen, a food writer, takes the opposite approach in Small Victories, describing cooking as more of an intuitive process. As the title suggests, her recipes are all about little pleasures, special insights, and small but satisfying achievements. “The only way to become a cook is to cook,” she writes, “and the road to becoming a good cook is paved not only with repetition but also with the intuition you gain along the way.”

There are cookbooks that can transport you to another place, like My Life in Paris with David Lebovitz, an expat who rhapsodizes about French chocolate shops and farmers’ markets even as he longs for the American peanut butter he left behind. Robin Ha, a cartoonist, uses colorful hand-lettered comics to share recipes, family stories, and the history of Korean cuisine in Cook Korean. Sometimes a good cookbook can even help you through a difficult time in life, as when Judith Jones, who was Julia Child’s editor, wrote The Pleasures of Cooking for One, a cookbook she developed after the death of her husband.

And don’t forget your own collection of recipes, whether they’re in a drawer or a box or a book—the dishes passed down from your parents and grandparents, that cake your neighbor likes so much, the splattered notecards you can never seem to find when you want to make soup or spaghetti sauce. As ISC President Kiran Singh Sirah wrote last November, every meal is a story that tells about “the traditions of our everyday lives—the foods, rituals, beliefs, and other cultural markers we use to express our values and identities.” Cooking is a kind of storytelling, and like all stories, it’s best shared with others.

——-
Stories in Motion is a regular feature in which ISC examines the fresh ways we see the power of storytelling at work in the world.