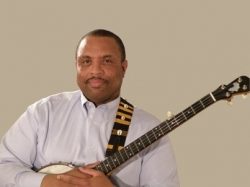 Rex Ellis was a storyteller before he knew that storytelling was a thing—that is, before he knew about Jonesborough, or the National Storytelling Festival, or even storytelling as a professionalized art form. He tapped into it almost by accident years ago, when he was an educator in charge of the black history program in Colonial Williamsburg. Drawing on his fine art roots to find new ways to tell difficult tales to a broad audience, he began to use theatrical techniques to develop stories about slavery.

“My frustration was that everybody looked at slavery from the standpoint of facts and statistics,” Ellis tells us. “Nobody ever used the names of those who were enslaved. I wanted people to see slavery as a sort of three-dimensional environment that involved people who were caught up in the institution rather than seeing an institution that was impersonal and not connected to humanity. So I came up with the idea of creating a series of stories around people who were citizens of Williamsburg during the 18th century. I created several characters and used them to talk about the sort of issues that were important.” The program caught on fast, and soon enough Ellis found himself on the main stage at the National Storytelling Festival, performing some of his stories as a featured teller.

Since 2008, Ellis has worked as the associate director for curatorial affairs at the National Museum of African American History and Culture, the newest addition to the Smithsonian Institution in Washington, D.C. There, artifacts connected to some of the greatest triumphs of African-American culture lie in uneasy proximity to markers of our country’s darkest moments. It’s up to Ellis and his team of curators to make these artifacts speak, to tell the museum’s visitors about the people and places and events they represent.

The museum’s growing collection has relied heavily on donations, often collecting objects from everyday people who happened to have them displayed in their homes or even tucked away in their attics. The collection process, too, depends on storytelling as curators elicit rich details, obtaining the information that is needed as the pieces go through the intake process, which involves careful authentication. Eventually, all that information is boiled down into what is on display at the museum. “The curator’s unfortunate job is to determine in 75 words what sort of story one will tell that explains the core of what that object is,” Ellis says. “You have to choose carefully.” Often, curators must consider not just what they want to say about the object itself, but what that object says about a larger moment in history. That’s a lot to edit down into a few sentences on a placard.

The museum’s permanent collection includes clothes, instruments, and other items that have belonged to cultural icons, as well as artwork and other memorabilia from important moments in history. These are, by and large, the happy stories. But there are also many painful stories connected to moments in American history that are more difficult to process and face. Telling these stories can be a challenge, starting with the collection process and continuing through the object’s eventual display in the museum. Ellis recalls a series of hard conversations he and his staff faced surrounding the casket of Emmett Till, a 14-year-old boy whose brutal murder helped fuel the Civil Rights movement.

“We weren’t even sure we wanted to collect it, much less display it and interpret it,” Ellis recalls. “That was the most questionable object we had in terms of whether or not we were going to actually display it. All the curators got together with the director, and we extensively talked about what we wanted to do. In the end, we decided that the iconic nature of the object itself and what it said about the beginning of the Civil Rights movement—all of that convinced us that it was an artifact that we should acquire and interpret.” Once that decision was made, it was just a matter of how to handle such a horrible moment in history in such a way that was both tasteful and true.

Since the museum opened to the public late last year, Ellis and his team continue to work hard behind the scenes to expand the collection and fill the gaps, so to speak. (Some key artworks and artifacts have been borrowed from other institutions.) They’re still collecting and interpreting the stories connected to special objects, just as they were in all the years leading up to the museum’s grand opening. The many small stories that the National Museum of African American History and Culture tells its visitors add up to a narrative about the country itself, and what it means to be an American. Like all storytelling, it helps us understand who we are, and also who we need to be.

——
Stories in Motion is a regular feature in which ISC examines the fresh ways we see the power of storytelling at work in the world.